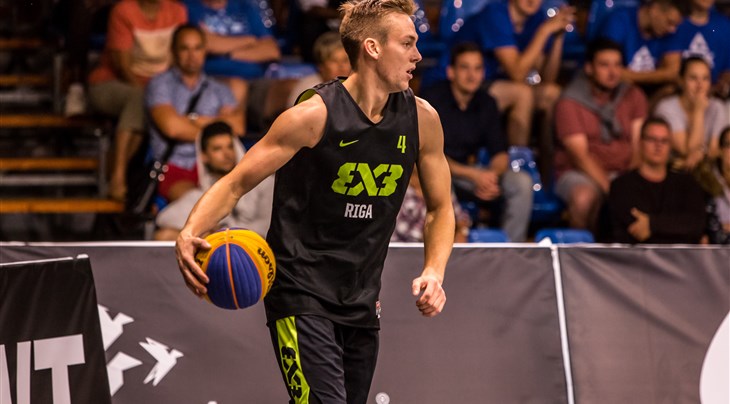 BEIJING (FIBA 3x3 World Tour 2018) – The best 3x3 players in the world will be at the FIBA 3x3 World Tour Bloomage Beijing Final. Thirty-eight of them will disagree but here’s the 10 players you should keep an eye on this weekend.

These are our 🔝🔟 players to watch at the #3x3WT Bloomage Beijing Final. Which player are you most excited to watch in 🇨🇳?

Mr Bullutproof is just plain disrespectful on the court. You won’t find a more talented baller than the Novi Sad Al Wahda star. His sick handles, passing wizardry and clutch shooting – where he finishes off games like he’s playing Mortal Kombat - makes him the number one player in the world.

Dusan’s brilliance has made him a social media sensation with his filthy moves being showcased around the world on ESPN. He has won too many awards to drop here but Mr.Bullutproof has claimed three MVPs this season and will be favored to add another in Beijing. Oh and his team is unbeaten in 27 games this year. Just saying.

If Riga Ghetto are going to win in Beijing, they are going to need to jump on-board flight KLM. There isn’t a more exciting player in 3x3 than Lasmanis who gets above the rim like he’s Neil Armstrong. He has put many unfortunate defenders on memes with his gravity defying posterizers but Lasmanis is much than just a nasty dunker.

When he isn’t driving to the basket like he’s in an Uber, the 24-year-old can sizzle from downtown making him almost impossible to stop when he’s feeling it.

If Mr Bullutproof doesn’t get you, then Dejan Majstorovic aka the Maestro will. There is a good reason why he has one of 3x3’s best nicknames. The Maestro is a sniper. He’s like a bottle of Coke: you should never leave him open.

The Maestro holds the record in the shoot-out contest – with 15 points - and loves nothing more than draining buckets under pressure. His insane shot making was best seen in Hyderabad, where he won the MVP to continue Novi Sad Al Wahda’s unbeaten record this season.

Michael Linklater might be the shortest player of the tournament, but the Saskatoon star is a commanding presence for his team. The 36-year-old is the veteran of the Canadian team, who are set to be one of the dark horses in Beijing.

A pioneer for 3x3 in Canada, Linklater is competing in his sixth season on the World Tour and his best individual moment was winning the Lausanne Masters 2016 MVP. Linklater can cross like Rick and bench press your entire family so post him up at your own risk.

Pick your poison for the best 3x3 baller in the world- Mr Bullutproof or Stefan Stojacic aka Mr Robot. You can’t go wrong. The Liman Tesla Voda star is the complete player and can do everything on the court. Stojacic fills up the stats sheet and lights up from deep when he’s cooking – which is most of the time.

The number two player in the world has more awards than Beyonce and cleaned up at Utsunomiya winning the MVP and also the last two in Chengdu and Penang. Mr Robot is not all machine, his swagger fuels the number one seeds who are eyeing glory in Beijing.

The Serbian powerhouses have swept all before them on the World Tour with Ljubljana the only other team to have won a Masters this season. The Slovenians claimed the Mexico City Masters – yes, Novi Sad Al Wahda and Liman Tesla Voda were absent but Ljubljana still deserved their victory lap.

The star in Mexico was Jasmin Hercegovac, who showed he can flat out ball on the big stage and lived up to his nickname of being the Ice Man. He wasn’t such a Nice Man against Ponce in the Mexico City Masters with a lights out 15 points – and 42 overall in the tournament - to prove he loves the big moments.

All aboard the Zuev hype train! The 22-year-old has already had the crowd on its feet at the international level with Russia during a successful U23 World Cup. He has turned heads with his shooting range and ability to get to the rack.

Zuev is the next sensation but his time could be now. Even though he is young and making his World Tour debut this season, Zuev is unafraid and will command the ball in the clutch. He’s always ready to battle, call him Alexander the Great.

Do you remember last year’s game-winner in the final? Of course, you do. In perhaps the most incredible finish ever, Bogdan Dragovic aka the Dragon hit an unbelievable buzzer-beater to win the championship for Zemun over Novi Sad Al Wahda. Deservedly, he won the MVP.

The same heroics have not been seen this year and Zemun are seeded sixth in Beijing. But the champs can’t be underestimated to pull another rabbit out of the hat, particularly if the Dragon is spitting out flames.

Not long ago, Robbie Hummel was playing in the NBA with the Minnesota Timberwolves. The sharpshooter has had an incredible hoops journey. He has successfully made the adjustment to 3x3 ball with his shooting and size - he’s 6’8 - causing headaches for opponents.

The US has struggled on the World Tour with a two-year drought but if the former T-Wolf can run like a greyhound and guard like a pit-bull then the dog days are over.

With three players in their 30s, Piran have shown on the World Tour this year they are ageless like Jay Z. At 38, the oldest of them all is Simon Finzgar aka the Sphinx who can still break ankles. Here’s some advice for defenders – don’t be fooled by the Sphinx’s date of birth, he still has it.

Piran’s pretty teamwork comes from playing together for many years and at the heart of that is the former world number one player who can still get to the rack and drop dimes whenever he pleases.