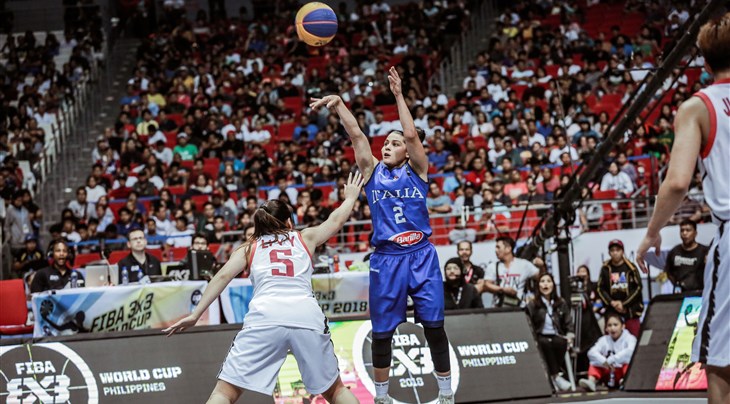 The Belgian teenager won 3 gold medals last year in U18 categories and will get his 1st cap for the senior national team at the Europe Cup. Peeters should be very popular in Bucharest. Not just because of the perfect hair and the big dunks. In the country of Count Dracula, we know how to appreciate the young blood.

The winningest player in 3x3 history is back as number 1 in the individual world ranking and he has been simply unstoppable this year. Mr Bulletproof is now 22-0 at the World Tour and 10-0 with the Serbian national team in 2018 and he’s won MVP at the World Cup and 3 World Tour Masters already. Last year at the Europe Cup, he broke the Internet with a sick ridiculous move. What does he have up his sleeve this season?

He’s the Benjamin Button of 3x3. Finzgar might be twice Vincent Peeters’ age but he can fly just as high above the rim. He’s turned so juvenile he’s now more active on social media than most teenagers. The Sphinx comes back to chartered territory. Last time Bucharest played host to the Europe Cup in 2016, he is the one who scored the gold-winning basket.

There’s never a dull moment when ‘Money in the Bank’ Hicks steps on the 3x3 court. It’s safe to say he won’t lead the Europe Cup in key assists and his 2-pointers are often more contested than Donald Trump but Hicks can put on a show and has the best smack talk game on the 3x3 scene. You’d better take him seriously: he led Poland to the semi-finals of the World Cup just 3 months ago and was one signature step-back away from knocking out Serbia.

What a difference a year makes. Since scoring that game-winner against Serbia and winning the title at the Europe Cup last year, the lefty Latvian has become a top 10 player in the world. The 24-year-old can pull up from anywhere outside the arc and has a dangerous behind-the-back dribble move. And when he takes the baseline and connects with his partner in crime Nauris Miezis, he’s got more bounce than an astronaut.

The 23-year-old is the only player left from the team who won bronze for France at the FIBA 3x3 World Cup. At the time, the Annecy native showed an uncanny ability to play D, shoot the J and embarrass her defender. Since then, she’s turned full sicko mode with 2 wins in 2 women’s international tournaments. If she wins in Bucharest, she might be your new number one 3x3 player in the world.

The Mighty Mouse is back at the Europe Cup after taking home silver last year in Amsterdam. Palomares might be shorter than Ariana Grande but she definitely has more range. She won another silver medal, at the shoot-out contest of the FIBA 3x3 World Cup 201?

Here’s another player who tasted silver, at the Europe Cup 2016 in Bucharest. Ursu means Bear in Romanian and the 25-year-old is an absolute grizzly, the Grit and Grind type you find in Memphis. Her motto is “savage mentality but namaste” but we have yet to see the namaste part. Ursu can fire up a crowd and hit the most cold-blooded shots you’ll ever see.

Dora Medgyessy (Hungary)
By the time you finish admiring her new hair color, the Debrecen native will have racked up 10 new key assists. The pick and roll savant comes back to Bucharest, where she was named MVP of the Europe Cup back in 2016. Hungary will play without Alexandra Theodorean in Romania so if the team takes home another medal, it will mean Medgyessy went beast mode again.

The Philippines had a star lineup at the FIBA 3x3 World Cup 2018, Dusan Bulut shined bright in Manila but the biggest star of the competition was playing in the women’s category. The shortest player in the tournament Rae Lin D’Alie aka Rae Rae was spectacular. With her, the risk of an ankle-breaker is chronic, call her Doctor Rae. Italy had never won a medal in an international 3x3 tournament and D’Alie went on to win the whole thing, multiplied her followers by 5 and established herself as one of the biggest names in the game.