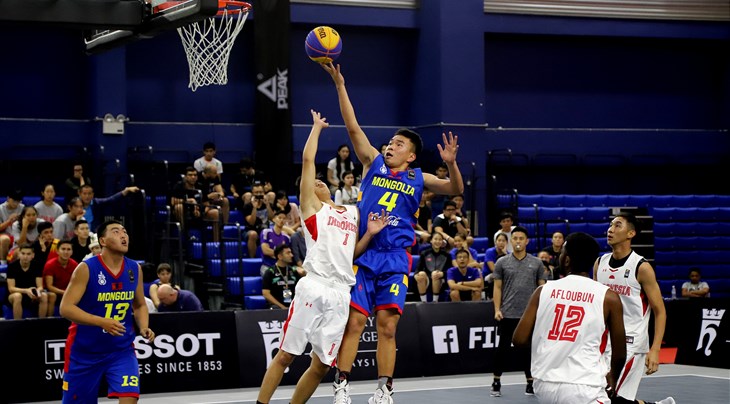 The 17-year-old is predestined to be one of the best ballers the U.S has ever seen. The Chainsmokers fan will set the 3x3 court on fire at the Youth Olympic Games. Can she become the new Katie-Lou Samuelson?

Let’s be honest: the MVP of the FIBA 3x3 U18 Asia Cup is the best thing coming out from New Zealand since “The Lord of The Rings”. The 6’ 3” star is more intimidating than an “All Black” when he goes for the dunk.

Who can stop him? @max_degeest 🇳🇿 was the best player of day 1at #3x3U18 Asia Cup

Gantsolmon led Mongolia to the bronze medal in the last 3x3 U18 Asia Cup and even made the Team of the Tournament. Now, the challenge is even bigger, Khan he lead Mongolia to their first-ever Olympic Medal?

The 3x3 U18 Europe Cup 2017 Champion is back on the 3x3 court in Argentina. With his quick handles and his sweet J, he can lead Belgium to gold for the second consecutive year.

The 3x3 U18 Europe Cup Team of the Tournament Member is faster than Mbappé. The 5’6” star will break your ankles with her quick first step. Can she win another medal this year after the silver she won in Debrecen?

The #1 3x3 player in the world in the U18 category is just unstoppable. Ater leading Czech Republic to silver last year at the 3x3 U18 World Cup, she is hungry for more. Good luck trying to stop her in the post.

The MVP of the 3x3 USA National Championships 2018 was born with a basketball in his hands. Winning a gold medal is in his “Lucid Dreams” (his favorite song) and he will definitely go for it in Buenos Aires. Just prepare for the show: the buckets come always for free with Patrick McCaffery.

Remizov punched the rims at the 3x3 U18 Europe Cup 2018 like he was Khabib Nurmagomedov. The Krasnodar native is one of the most athletic U18 players we’ve ever seen. Good luck trying to contain him under the rim.

The FIBA 3x3 U18 Europe Cup 2017 MVP might be the most famous 3x3 player in the world after her mixtape went viral last year. She has a killer crossover and even more moves than followers on Instagram.

Will @Orsi_21 bounce back and bring 🇭🇺 gold again 🥇 at the @youtholympics in @BuenosAires2018?

The MVP of the FIBA 3x3 U18 Asia Cup 2018 led China to gold before! The 16-year-old is faster than a bullet train. Just watch your ankles if you are switching on her.