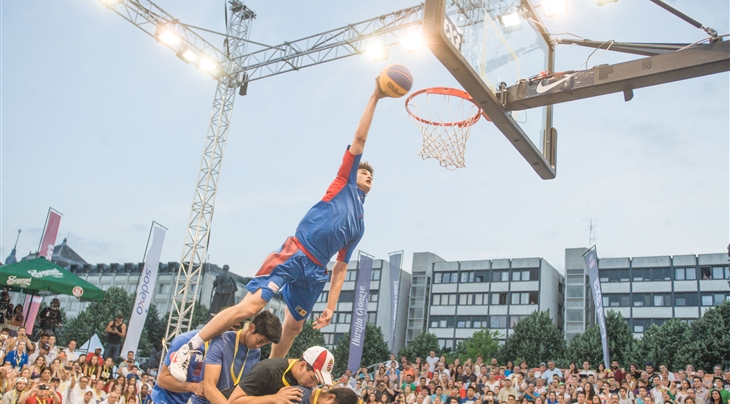 MANILA (FIBA 3x3 World Cup) - Some of the brightest stars in the Philippines have competed in 3x3 events, created big upsets and won titles. We look at the Top 10 Filipino wins in 3x3 history.

At 10, it’s Kobe Paras, Kiefer Ravena and Jeron Teng combining forces to beat Romania at the World Cup 2017. Not too shabby when you think Romania had won the Europe Cup just 3 years earlier, with a different team.

Number 9 is one of the largest wins in Filipino history, a 21-8 beating against Poland at the World Cup 2016 with Glenn Khobuntin in the role of the Punisher.

At 8, it’s a young Kobe Paras and Ricci Rivero silencing an entire crowd and the least objective commentator of all time in Hungary at the U18 World Cup 2015.

Coming up at number 7 is one of the most promising Filipino teams of all time beating basketball powerhouse Israel at the U18 World Cup 2017. We’ll never forget AJ Edu’s ridiculous wingspan and Juan Gomez de Liano’s perfect hair.

Next up at 6 is one of the biggest Filipino wins on the pro circuit at the FIBA 3x3 World Tour. At the 2015 Final, thousands of Filipino fans come from all over the UAE and transform Abu Dhabi in Little Manila. The crowd leads Calvin Abueva to a beast mode performance and helps Manila North upset Team Doha, one of the big favorites that year.

At 5, we go back to 2016 at the U18 Asia Cup for the most dramatic come-back win in Philippines history. Don’t know about you but I still have goosebumps from that John Clemente game-winner to beat the Malaysian hosts and send the country to the final.

At number 4, it’s Troy Rosario outrebounding the 7’1 Birdman at the Robinsons Place Mall in Manila. The local crowd there went louder than an angry Eminem as Manila North scored an unbelievable upset against former World Tour winners Ljubljana from Slovenia.

3 is a magic number and we go back to the 2016 World Cup team. Against a Romanian team featuring 3 of the 4 players who won the European title just 2 years before, Team Philippines goes P to the Uso and Karl Dehesa buries a game-winner for the ages.

At 2, it’s a story of David versus Goliath with a young Terrence Romeo leading Manila West at the SM Megamall in the final of the Manila Masters 2014 against a taller, stronger and more experienced Doha team. After John Aldrech Ramos scored that game-winner, the Manila crowd went louder than UFC announcer Bruce Buffer.

Gilas but not least, the biggest 3x3 win in Filipino history has to go to young Kobe Paras. In 2013 and 2015, the 6’6 teenager won 2 gold medals for the Philippines at the dunk contest of the U18 World Cup. In 2015, he narrowly edges out NBA player Raymond Felton’s nephew in the final. In 2013, he wins the contest despite being the youngest player in the tournament at just 15 years old.