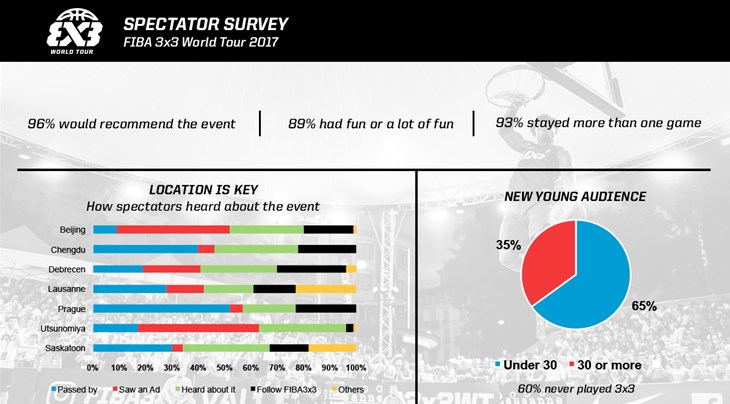 MIES (FIBA 3x3 World Tour) – FIBA conducted a satisfaction survey on 7 different FIBA 3x3 World Tour events in 2017, which showed exciting results, including 96% of the spectators saying they would recommend the event to a friend.

Spectators were polled over a 3-month period last season, starting with the Saskatoon Masters and covering 5 additional Masters in Utsunomiya, Prague, Lausanne, Debrecen and Chengdu, besides the Final in Beijing.

A whopping 96% claimed they would recommend the event to a friend.

Several additional stats confirmed the fervor of the people attending the event: 93% stayed for more than one game and 89% admitted having fun or a lot of fun at the event.

The survey confirmed World Tour events attracted a new young audience to the game of basketball, one of the founding principles of 3x3. 65% of the spectators were under 30.

60% of the people said they had never ever played 3x3 before and 27% came to the event after simply passing by (a number that jumped to 40% in Chengdu and 50% in Prague). These numbers illustrate 3x3’s appeal outside of the 3x3 community and the power of having urban culture festivals in high-traffic urban locations.

Last, FIBA also included an open question on how to continue improving the fan experience. The most frequent feedback? Even more seats at the events! In 2018, the venue capacity will be increased at the Saskatoon, Prague, Lausanne, Mexico City Masters and the Bloomage Beijing Final.