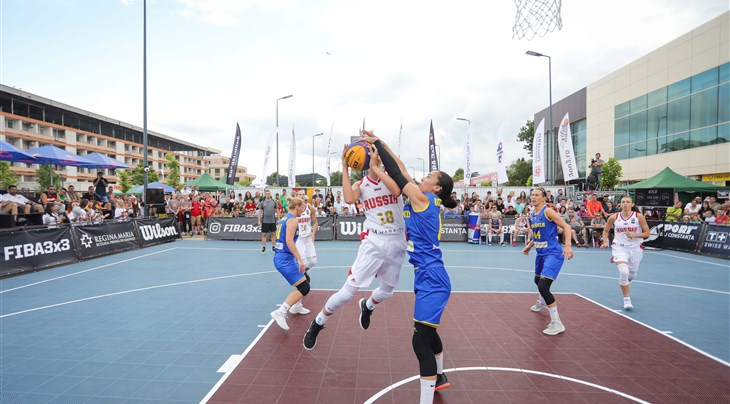 In total, only six and a half games were played in the outdoor arena from Mamaia Beach, until the heavy rain stopped the action for good in the afternoon session. Romania was leading Russia 6-5, the home crowd was cheering for their favorites, but everything ended there.

The morning session was affected as well by the rain and some of the games were moved to the local indoor arena.

Men’s Pool B is the only one where everything is clear after the first day. Spain and Poland will advance in the quarter-finals at the expense of Azerbaijan, who suffered two heartbreaking losses. First, Nacho Martin nailed a two-pointer at the buzzer to win it for Spain, 17-15.

Then, the fighting spirit of the Azeri team put them in front of Poland for most of the game. With the game tied at twenty and 2 seconds to go, Moses received the ball under the basket, wide open, but passed it beyond the arc, thinking probably that his team needed a two-pointer. The time expired and after that Poland finished them in overtime with a two-pointer by Szymon Rduch.

Everything is still up to grab in all other pools. In Pool D, Stephen James caught fire against Germany, scoring eight points from beyond the arc to lead his Irish team to victory. Now Ireland need Croatia to defeat Germany tomorrow, to bring them one step closer to a historic qualification to the FIBA 3x3 Europe Cup.

Lithuania won a tough game against Georgia in Pool A, 14-12, while the world champs Serbia didn’t have the chance to play yet in Constanta. In Pool C, home crowd favorites Romania didn’t enter the court, while Bosnia and Herzegovina beat Sweden, 21-15.

In the women’s competition, Israel and Switzerland were dominant and both teams won their first two games in Pool A. Israel, with former WNBA star Shay Doron in the roster knocked down the number 1 seed Netherlands 17-13. In the only completed game in Pool B, Austria beat Belgium 14-11, while Romania and Russia will resume their duel tomorrow.