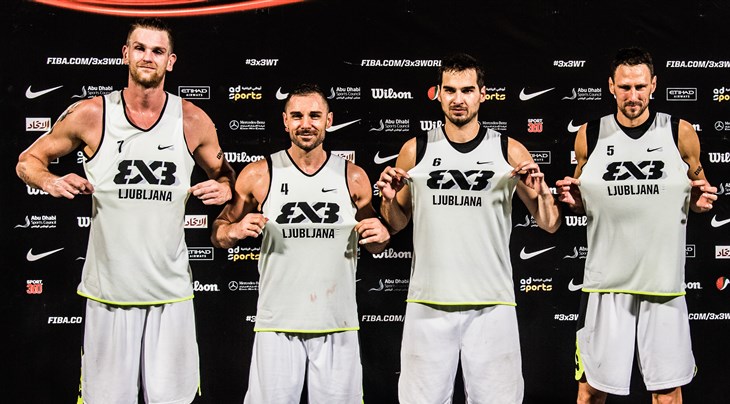 "Obviously we are losing a lot of experience," the Slovenian sharpshooter said.

"Tomo [Cajic] and Ales [Kunc] are 2 guys with whom we achieved everything possible. It will definitely have an impact."

Cajic and Kunc were both on the team that won the FIBA 3x3 World Tour Abu Dhabi Final just 1,5 years ago.

After losing their title in Beijing last year, the team contemplated changes. The news that Team Kranj (SLO) lost 2 players on long-term injuries was a catalyst: Cajic and Kunc opted to change team ahead of the season.

"There are no hard feelings," Hercegovac explained. "We love them and truly wish them all the best."

To fill the void, Ljubljana announced the arrival of sharpshooter Dejan Mlakar, who led Monaco to the quarter-finals of the Debrecen Masters last year.

"When we saw him play in Hungary," Hercegovac said. "It clicked! We had this guy sparring with us the whole time, what were we thinking? He's not just a shooter: he can drive, he plays defense. He was the MVP of the Slovenian basketball league in 2013 so he's a quality player."

"It was the end of an era for teams playing with 3 big guys," The Iceman added. "No other team was like that. We are just adjusting our team to the evolution of the game to make our way back on top."

The talented 26-year-old Jakob Cebasek will be the second addition to Team Ljubljana. The versatile 6ft 7in (2.00m) player made a few appearances for Ljubljana in 2016 and won the Raiffeisen Lugano Challenger back in 2015 with Domzale (SLO).

The returning Blaz 'Birdman' Cresnar and Zelimir Zagorac will complete the team.

Do all these changes make Ljubljana contender again? Hercegovac definitely thinks so:

"I believed in my team in previous years and I believe in this team now. I think we have great potential to be back on top of the 3x3 game."