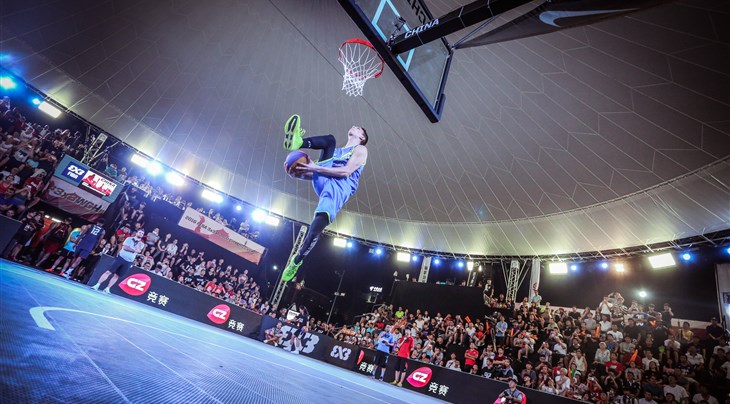 Two years ago, Krivenko became the first-ever pro dunker to win the FIBA 3x3 World Cup Dunk Contest and comes ready to bring Ukraine a second gold medal with some of the most creative dunks in the world.

Ukraine have a Plan B if this doesn't pan out with one of the most powerful dunkers in the world, Poddubchenko, who won several FIBA 3x3 dunk contests in recent years, including the FIBA 3x3 World Tour Final in 2016.

One of the most influential dunkers of all time Guy Dupuy will make his first-ever appearance at a FIBA 3x3 Dunk Contest to represent France.

The diminutive Gediminas Zitlinskas (5ft 9in) caught a lot of attention when he won the dunk contest of the World Tour Prague Masters last year. People this tall should not be able to complete a scorpion dunk. Zitlinskas will be the only chance of medal for Lithuania at the World Cup.

Last but not least, the Philippines will be represented by 2 dunkers: player/dunker Rey Guevarra (who won the Manila Masters Dunk Contest back in 2015) and the 5ft 9in David Carlos, who beat the odds by winning at the Chengdu Masters last season.

The Dunk Contest Qualifier will be staged on June 10 at 3.50 pm local time (GMT+8) and will consist of 2 rounds. The 4 players with the highest scores advance to the next stage on June 12.