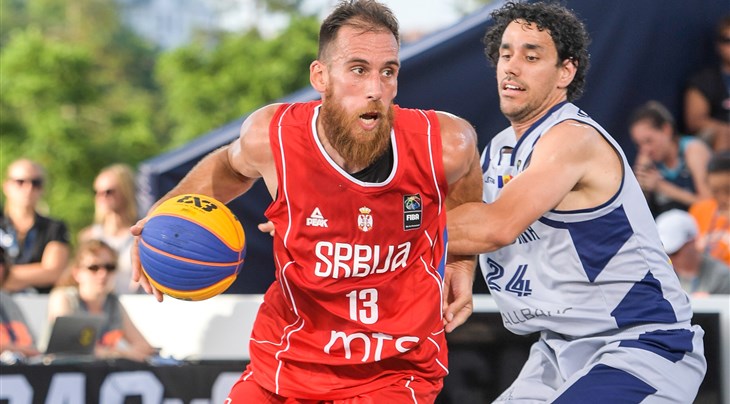 The Serbian Basketball Federation announced it will not bring back the exact same team which won the last 2 editions of the FIBA 3x3 World Cup. The triple threat of Dusan Domovic Bulut, Dejan Majstorovic and Marko Savic will make their return however.

The 33-year-old defensive ace Zdero provided toughness and shooting to the team that won the 1st edition of the FIBA 3x3 World Cup in Athens, Greece back in 2012. He was also on the teams which finished 2nd in Moscow, Russia in 2014 and 1st both in Guangzhou, China in 2016 and Nantes, France in 2017.

"We have been together all these years", childhood friend Bulut explained.

"Anytime a change happens, it is tough for the people".

While Zdero has been a part of every World Cup campaign, he did miss extended time last season due to an ankle injury. This is one of the reasons why he slipped in the FIBA 3x3 Individual World Ranking to 14th overall. His absence last year forced his team to pair with new players both at the FIBA 3x3 Europe Cup and during the professional season.

"With all the injuries we had last year, we have experience adjusting to new players. It is more difficult this time because the 3x3 pro season has started [Stojacic will compete at the Chengdu Challenger this weekend while Bulut, Majstorovic and Savic will play at the Ulaanbaatar Challenger the following week] and we won't have much time to prepare together."

While the guys have changed, the goal remains the same: win a 4th title in 5 editions in a special place, the Philippines. Back in 2015, Bulut and his pro team Novi Sad made a lot of Filipino fans when they won the FIBA 3x3 World Tour Manila Masters in a crammed Robinsons Place shopping mall.

"It's a dream come true," the number 3 player in the world said.

"This country is so passionate about the game. To play for these fans, I know it will be a thing that I'll remember for the rest of my life."

The addition of Stefan Stojacic means Serbia will feature the top 4 players in the world. Stojacic was a revelation last season, leading his team to 2 World Tour Masters titles and winning the World Tour regular season MVP award.

Though Stojacic will make his 3x3 national team debut, the 29-year-old has experience representing Serbia. He led the country to 2 European and 1 World titles in youth basketball categories, including a historic performance against a young Steph Curry back in 2007.

"For me, it's always a great honor to play for my country", Stojacic said.

"Though we're rivals with the rest of the team during the pro season, we'll be a team when we play for Serbia. I will adapt to find my role and give my best like everytime I represent my country."

Chemistry is key in 3x3 in a game without coaches on the court and rare help defense but the Novi Sad native believes he should be able to gel with the team quickly.

"We don't usually play together but we know each other really well. We are scouting them all season and are playing against each other all the time."

The 6ft 4in (1.94m) Stojacic brings a bigger body to the Serbian team and a lot of offensive firepower. He was the top scorer at the Debrecen and Mexico City Masters last year.

"I think this selection has 4 quality offensive players. I believe I can also play defense at a very high level though I don't want to compare with Zdero."

How will Serbia perform in the Philippines with this new-look roster?

"I grew up watching my 2 idols Aleksander Djordjevic and Predrag Danilovic. These 2 were apparently not the best friends in the world. This didn't stop them from winning 2 FIBA EuroBaskets together back to back in 1995 and 1997."