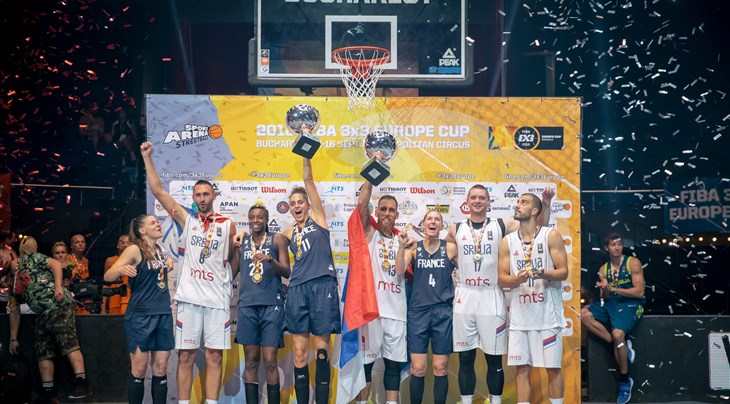 Serbia won their first-ever FIBA 3x3 Europe Cup after defeating Latvia in the final in an absolute nail-biter (19-18). This marks the end of the Serbian curse as the 4-time World Champions had yet to win their first European crown.

Dusan Bulut added another MVP award to his trophy cabinet after leading Serbia to the title in the iconic location of the Bucharest Metropolitan Circus. The number one 3x3 player in the world scored 13 of his team's 19 points in the final.

He was joined on the team of the tournament by Karlis Lasmanis (Latvia) and Simon Finzgar, who led Slovenia to the bronze medal.

In the women's category, France also finished with a perfect 5-0 record and dominated Netherlands in the final (21-5).

Migna Touré was named MVP of the competition. The 23-year-old led France to their first-ever gold medal in the women's category and finished the competition with 35 points. She was joined on the Team of The tournament by teammate Ana-Maria Filip and Ukraine's Anna Olkhovyk, who scored a memorable Tissot buzzer beater in overtime in the bronze-medal game against Italy.