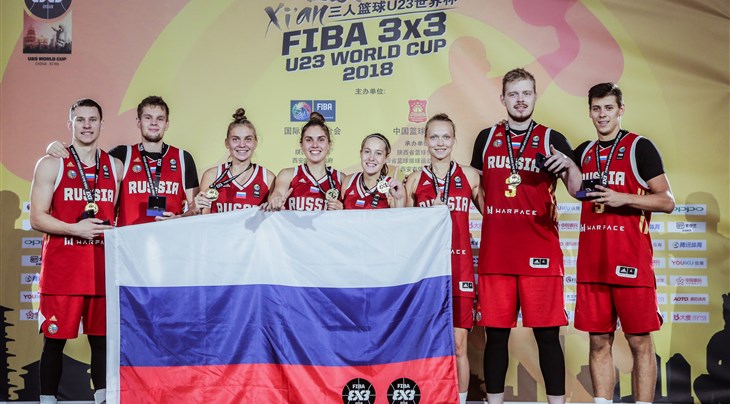 The 2 teams had a perfect 7-0 record in China but the men had to bring their A-game in a hard-fought final against Latvia (21-18). 3x3 22-year-old star Alexander Zuev took over in this game: he had a game-high 13 points, including 5 shots from behind the arc. He topped all scorers in Xi'An (61 points, 17 more than anyone else) and was logically named MVP of the tournament.

Armands Ginters had 9 points for Latvia in the final and joined Zuev on the team of the tournament. The last member of the dream squad was Attila Demeter, who led Hungary to bronze after a thriller in the third-place game against France.

In the women's category, Russia bulldozered their way to the title. Their 4-point win in the quarter finals against Belarus was their closest game. In the final, they ended Japan's Cinderella silver run (21-12) thanks to Alexandra Andrushchenko's 8 points and 2 clutch free throws courtesy of tournament MVP Elizaveta Komarova.

Their second place marked Japan's best-ever result at a FIBA 3x3 World Cup (regardless of the category), just 2 years before 3x3 makes its Olympic debut at the Tokyo 2020 Olympics.

The pocket-sized Mai Yamamoto (5ft 5in, 1.65m) and top scorer Viktoriia Kondus (who won bronze with Ukraine) were added to the team of the tournament.

More players were awarded medals - in presence of FIBA Vice-President Hamane Niang - for their achievements in the individual contests.

In the shoot-out contest, 19-year-old Filipino sensation Rhon Jhay Abarrientos earned the gold medal while Aleksandr Antonikovskii (Russia) got his second medal of the week (silver) and Laura Zdravevska won bronze for Germany.

Last but not least, Janiek van veen (Netherlands) struck gold in the skills contest. Theresa Simon (German) and Agustina Garcia (Argentina) had to settle with silver and bronze respectively.