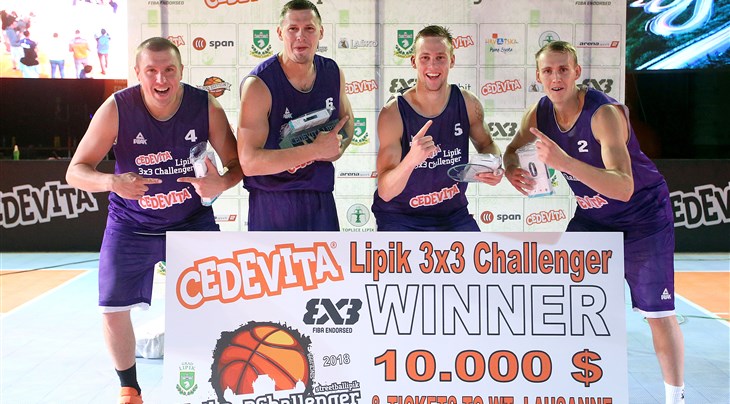 LIPIK (3x3 Challengers) - It took them over 2 months but Riga (LAT) finally won their 2nd Challenger of the season after edging out (21-18) Humpolec Bernard (CZE) in the final of the Cedevita Lipik 3x3 Challenger in Croatia on June 22-23, 2018.

After dropping their opener against local favorites Split Statist (CRO), it looked like the bad streak was about to continue for the young Latvian team. After winning the Nanjing Challenger in April, Riga missed 3 straight opportunities to qualify for the World Tour in Moscow, The Hague and Hang Zhou.

Moscow must have been on their mind during the final in Lipik. Riga were in control, up 20-17 in the semi-finals when Ondrej Siska hit back-to-back 2-pointers to win the game for Humpolec Bernard in the Russian capital.

What a finish!!! 😮😱🤯
Ondřej Šiška 🇨🇿 was in super saiyan mode at the Tinkoff Moscow Open Challenger 🇷🇺. pic.twitter.com/vde1LtkLvr

But this time around, Riga did not let the Czech star get hot and tournament MVP Karlis Lasmanis finished things off from close range in the title game.

Riga now have secured 3 Masters this season (including Saskatoon and Chengdu, based on ranking ). For Humpolec, the number is already 4 (including Utsunomiya, Prague and Debrecen).

No team on the professional circuit has been more on fire than Humpolec in the last 2 months. They earned a ticket to the World Tour in each one of the Challengers they played this season. The Czechs finished 2nd in Wuxi, Moscow, Lipik and won in Limassol last week.

The next Challengers will be held in Kaunas and Vieques on June 30 - July 1.

You can rewatch the Challenger on youtube.com/FIBA3x3