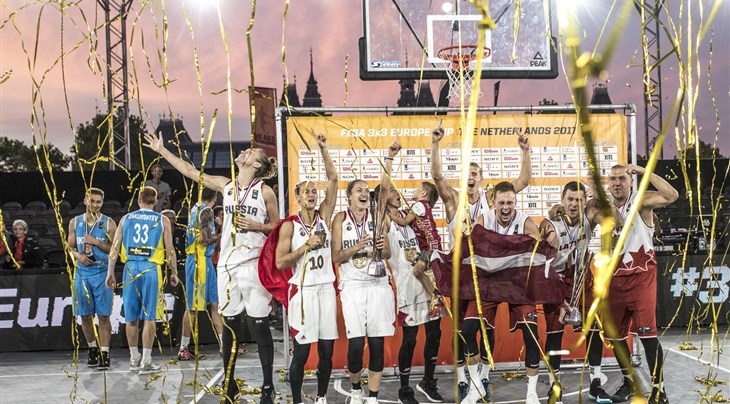 Following the automatic seeding based on the FIBA 3x3 Federation Ranking on August 1, pools are as follows:

With Russia out of the Europe Cup, 2 of the main favorites will clash as soon as the pool stage. World champions Italy and 2016 European champs Hungary will meet in Pool D. Have fun, Belgium.

The #1 seed Ukraine impressed at the France Qualifier. The team was undefeated and Krystyna Filevych was named MVP of the tournament. But the World Cup 2016 runners-up are up to a big test in Pool A against last year’s Europe Cup silver medalists (Spain) and Switzerland, who reached the semi-finals last time the Europe Cup was played in Bucharest (in 2016).

Belarus will make a first appearance at the Europe Cup. Their welcome package? 2016 World Champs Czech Republic and this year’s World Cup bronze medalists France, who did not lose a game at the France Qualifier.

Last but not least in Pool C, the Romanian hosts will look to improve on their 2nd place finish in Bucharest 2 years ago. But first come Serbia and last year’s bronze medalists, the Netherlands.

We know. It looks like we’re asking the same question every year. Is it the year the FOUR-TIME World Champions Serbia… finally win the Europe Cup? The road to gold starts in Pool A with 2 other teams who also went undefeated in the Romania Qualifier in Constanta, Bosnia and Herzegovina and Spain. Remember last time Serbia and Spain met at the Europe Cup, it finished like this:

Last time Slovenia and France met, Les Bleus won bronze at home at the World Cup 2017. Bucharest will bring back good memories to Slovenia who won the Europe Cup in Romania back in 2016. Good luck to Switzerland, who will play without their injured star Natan Jurkovitz.

In 2017 they came out of nowhere. This year, the reigning champs Latvia have a target on their back. And the Romanian hosts together with Hungary are waiting in line with bows and arrows. Keep an eye on Tomislav Ivosev of Hungary who won MVP at the Andorra Qualifier and joined the number 1 team in the professional circuit (Novi Sad Al Wahda) this season.

If you’re not excited by Pool D, we’re unfollowing you. It starts with Belgium, who will feature last year’s U18 Europe MVP Vincent Peeters. Who is he dunking on this year? The trash-talk MVP Michael Hicks, who led Poland to the World Cup semi-finals in June? Or a new-look Russian team, who went undefeated at the France Qualifier?