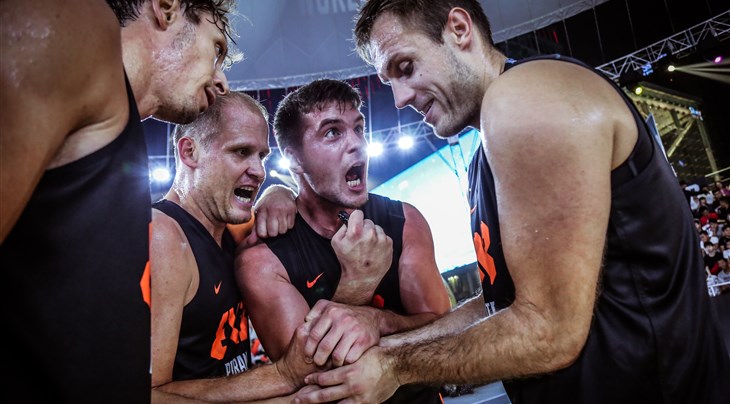 UTSUNOMIYA (FIBA 3x3 World Tour 2018) – The number 3 team in the world Piran (SLO) avoided any Top 30 teams in Pool B as they are looking to flip the scenario after finishing second in the 2 previous editions of the FIBA 3x3 World Tour Utsunomiya Masters, which will take place in Japan on July 28-29 this year. No Novi Sad. Both in 2016 and 2017, the number 1 team in the world crushed Piran's hopes in the final. This year, however, Novi Sad (who just won the Saskatoon Masters) did not qualify to Utsunomiya. Is this Piran's year? The Slovenians are playing well this season with 3 Challengers titles already. On paper Simon Finzgar & co. have one of the clearest paths to the knock-out rounds.

The number one team in China Dongguan MC will make its debut at the World Tour. The young squad (23 years on average) played in 2 Challengers this season, including a quarter-final run in Hang Zhou. The players also represented China at the FIBA 3x3 Asia Cup earlier this year and ranked 5th. The other team in the pool is Auckland (NZL), which has played in every edition of the World Tour but has not won a game... since 2015.

The biggest threat to Piran's hopes? The number 1 seed at the event Liman Tesla Voda from Serbia, who just finished second in the World Tour opener in Canada. Last year, Piran actually knocked out Liman in the semi-finals in Utsunomiya. But the Serbs are a whole more dangerous team this year. They are the only other squad to have won 3 Challengers this year and have become fully professional 3x3 players. To stop Stefan Stojacic aka 'Mr Robot' in Pool A, 2 Asian teams.

The name may be new but the faces are familiar. Inderbir Gill and Bikramjit Gill are back on the World Tour for Team Delhi 3BL (IND). They had a forgettable 2017 season but are just 2 years removed from making it all the way to the title game of the FIBA 3x3 World Tour Final in Abu Dhabi.

Don't sleep on Team Okayama (JPN), who reached the quarter-finals at the event last year and will continue to feature the Top 5 machine Devaughn Washington.

Pool C might just be the most competitive of them all. The World Tour reigning champs Zemun (SRB) did not exactly impress in Saskatoon last weekend (5th) but will see the return of their star player Bogdan Dragovic aka 'The Dragon', who was last year's Final MVP.

Add to that Humpolec Bernard (CZE), who was one of the biggest revelations on the Challengers circuit this year. Ondrej Siska has more TNT in his legs than Charles and Shaq and already earned his team 4 World Tour tickets this year. Speaking of teams who did well in Challengers, we may have the best Australian team ever with Melbourne i-Athletic, starring FIBA 3x3 Asia Cup MVP Thomas Garlepp. The 'Aussie Nowitzki' led his team to 2 Challengers finals this spring and is ready to prove himself on the big stage.

Pool D ain't bad either! Besides the 2-time World Tour winners Ljubljana, we'll get to see Amsterdam Inoxdeals (NED), who also just won their 4th World Tour ticket last weekend. The winners of the qualifying draw will complete the pool. Pretty scary thought when you know the number 11 team in the world Ulaanbaatar (MGL) will play there. Pool D may well feature 3 of the Top 12 teams on the planet!!!

In total, the event will star 7 of the Top 13 teams in the world and 14 teams from 11 different countries.

For those not attending the games in front of the iconic Futaarayama Shinto Shrine (entrance is free!), the qualifying draw will start at 1.30pm local time (GMT+9) on Saturday live on FIBA 3x3's official YouTube channel. The top-two placed teams from each pool in the main draw advance to a standard knock-out round which starts at the quarter-finals stage, from 3pm local time on Sunday.