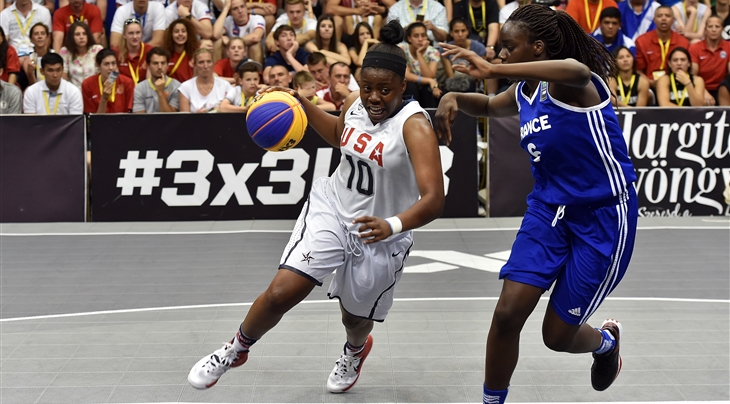 Former FIBA 3x3 U18 World Cup gold medalist and NCAA star Arike Ogunbowale will be one of the players to watch at the USA Basketball 3x3 National Championships in Colorado Springs, USA on April 21-22, 2018.

Twelve men’s teams and 12 women’s teams will compete over the weekend for a chance to be named US 3x3 national champs and an opportunity to play on the world stage.

The winners of the women’s category may have an opportunity to represent the US at the FIBA 3x3 World Cup in Manila, Philippines on June 8-12.

The US won the first two editions in 2012 and 2014, with women’s basketball stars such as Skylar Diggins-Smith, Jewell Loyd and Chiney Ogwumike.

Team N.A.A.K. will feature a lot of FIBA 3x3 experience with Arike Ogunbowale, who won gold at the FIBA 3x3 U18 World Cup 2013 and the 3x3 event of the 2014 Youth Olympic Games. The 21-year-old gained super-stardom this month after hitting back-to-back game winners at the NCAA Final Four and leading Notre Dame to the title.

Since then, the Milwaukee native graced the cover of Sports Illustrated, appeared on the Ellen DeGeneres show with Kobe Bryant and is set to compete in 'Dancing with the Stars'.

Ogunbowale will be joined by two other 3x3 alumnae: Napheesa Collier, who teamed up with her at the Youth Olympic Games and the towering Kristine Anigwe (6ft 4in, 1.92m), who paired with Ogunbowale at the FIBA 3x3 U18 World Cup 2015, where USA won silver. The superskilled Asia Durr will complete a young (21 on average) but extremely talented squad.

Team N.A.A.K will have to deal with high-level competition including a selection of athletes from the university of Washington (who won the event last year) and a dangerous University of Oregon squad, which features Erin Boley (who also played on that US team that finished 2nd at the U18 World Cup 2015) and college superstar Sabrina Ionescu.

The reigning champs Ariel Slow & Steady are back to defend their crown after their star Dan Mavraides hit a dramatic jersey-dropping game-winner in the final last year.

The 3x3 USA National Championships are THIS WEEKEND! One year ago we became Natty Champs and have had the honor of traveling around the 🌎 over the past 12 months competing as Team USA🇺🇸 . Last years final game: down 19-18 (first to 21)...@craigmoore20 hits a big time 3 from the top to go up 20-19 and with a heads-up play from @kappazah we get the steal, and your boy hits the game winner to become National Champions. You know the drill...#shirtoff @hoooofman coming in hot for the celebration!! 🍾 🏀💪🏼 3️⃣✖️3️⃣ #3x3themovement Follow our #olympicjourney here: @teamusa3x3