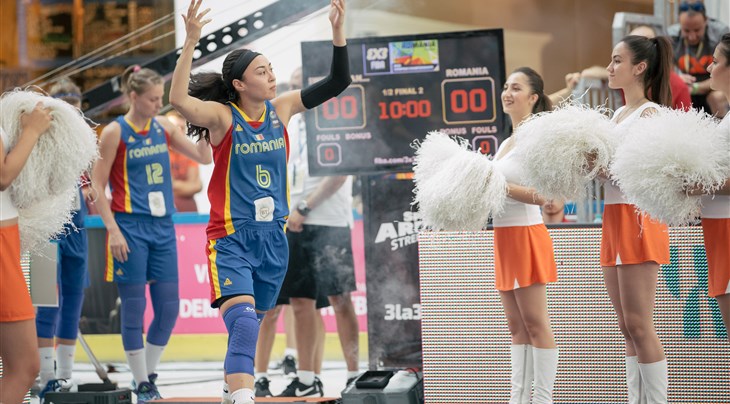 ROMANIA (FIBA 3x3 EUROPE CUP) - Men’s World champions, Serbia, women’s reigning European champions Russia, 2 of the most amazing dunkers in the world (Guy Dupuy and Jonathan Clark), plus plenty to cheer for the local fans, as both Romanian national teams will be part of the tournament: these are the main ingredients for what will most probably be an unforgettable 3x3 basketball weekend at Mamaia Beach, one of the most exquisite tourist summer destinations in Romania, located in the city of Constanta.

Freshly crowned kings of the world for a whooping fourth time, the Serbians from Novi Sad are starting their quest for the only trophy missing from their track record, the European one. Marko ‘Sub Zero’ Zdero is back in the traditional roster and Serbia will face Georgia and Lithuania in Pool A.

Poland surely will have more ambitions this year after their 4th place finish at the World Cup. Expect the number 2 seed’s star Michael Hicks to be a crowd favorite for his style on and off the court.

Spain will be a top contender for Poland in Pool B, while Azerbaijan can only hope for some miracle if they want to reach the quarter finals.

The local favorites, Romania, are bringing new players on the table for this qualifier. Amedeo Casale, part of the team that finished 7th in the U18 World Cup 2015, together with Vlad Cobzaru, alumni of Augusta University will join Marius Ciotlaus and Vlad Dumitrescu who just returned from Manila. Already qualified, as the host of the FIBA 3x3 World Cup, Romania will face Bosnia and Herzegovina and Sweden in Pool C.

Germany bring their young guns to Constanta. All the players are U22 and two of them are still teenagers. This team finished second at the Big Twelve tournament dedicated to U23 national teams, earlier this month in Voiron. Germany has the fourth seed in Constanta and will be part of pool D together with Croatia and Ireland.


The winners of the quarter finals will advance to the FIBA 3x3 Europe Cup. However, if Romania reach and win one of the QF, then classification games will be played until the last qualified team is determined.

In the women’s competition, Netherlands and Russia are the heavy favorites to qualify for the FIBA 3x3 Europe Cup in Bucharest, as the number one and number two seeds.

The top seed arrive in Constanta with big expectations. The Europe Cup 2017 bronze medalists will look to redeem themselves after a disappointing early exit in a difficult pool at the World Cup earlier this month.

One of the powerhouses in the women 3x3 basketball, Russia is ready to qualify yet again to the Europe Cup, after two golds and one bronze in the past three editions. Add two silver medals and one gold in the FIBA 3x3 World Cups and you have the full picture of what Russia means in women’s 3x3 basketball. Come and witness greatness.

Netherlands will face Switzerland, Slovakia, Lithuania and Israel in Pool A, while Russia will battle Romania, Austria and Belgium in Pool B.

In the women's category, the winners of each pool are directly qualified for the 3x3 Europe Cup. The 2nd and 3rd placed teams will play against 3rd and 2nd teams from the other pool respectively. Winners from those games play for a spot in the Europe Cup. If Romania (as hosts of the final) finish in the Top 3, then the team finishing 4th qualifies for the Europe Cup.

World Cup silver medalist Guy Dupuy and Jonathan Clark, assisted by the Dunk Godfather himself, Kadour Ziani, will rock the crowd with two slam-dunk sessions, one in each day.

Constanta is one of the of the most active 3x3 destinations in Romania in the past three years, with more than 10 FIBA 3x3 Endorsed events organized by the Constanta Basketball Association together with the local authorities.