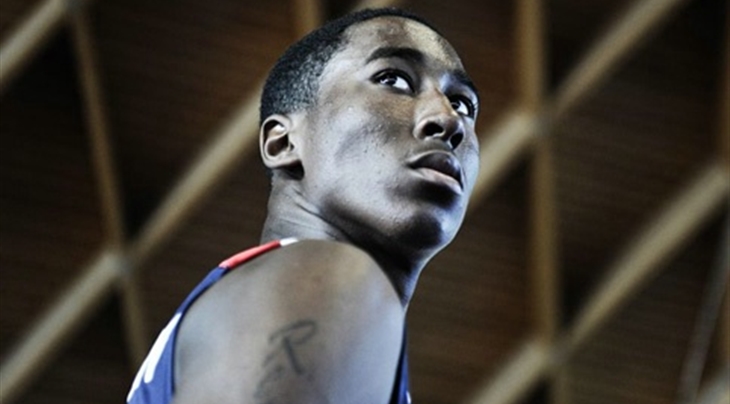 BROOKLYN (FIBA 3x3) - Did you know Brooklyn Nets star Rondae Hollis-Jefferson was a 3x3 pioneer? Back in 2011, 16-year-old Rondae was dunking on people in the first edition of the FIBA 3x3 U18 World Cup in Rimini, Italy. Seven years later, the 6ft 7in (2.01m) forward is making a double name for himself in the NBA with an eye on the young Olympic discipline.

RHJ: It was such a great moment, such a nice experience for a teenager. I was able to experience playing against the best guys of my class of age in 3x3 and I learned a lot during that tournament. When you compete at the world stage, you feel the love and the passion of the game and the incredible support of the fans for their national team. I really loved this experience, and I had a great time there. For a kid who is 16, travelling overseas and playing at the world stage is a unique experience.

What do you remember was the biggest adjustment for you to the 3x3 rules?

The adjustment was not complicated for me, as I grew up playing often on 3x3 and pick up games. Some rules are a bit different, but basketball is basketball. On half court, you have to play smart and have a great chemistry with your teammates, as the opponent’s defense is hard and physical. You develop your basketball IQ in 3x3 because you always have to get adjusted to the opponents’ game and to have less space to move on the court. It’s a great way to learn how to play on half court and develop your basketball IQ.

The 2011 edition did not end well for your team. You lost to Canada and finished 5th overall. What are your most vivid memories of that 1st 3x3 experience?

It was an interesting experience because I learned a lot despite not winning the title. We had a great group of guys; we had a great time and learned a lot about the game. I always try to learn even when losing and this competition helped me learn about taking the positive out of this kind of situation. We wanted the title but the other teams were very good too, and probably had a bit more experience at FIBA level than we did at this time. I will never forget it as I was very young and had a nice experience.

It was great because the fans were very nice and loud! It’s so great to travel and learn about other countries and other types of basketball. It was a better experience than it was in 2011, and I felt that I improved a lot on that year, also because of playing in that tournament. It was very hot too! (Laughs). I enjoyed the time there, a country [Spain] with a lot of basketball fans and a great history of our sport. We played against a lot of great teams and very talented young guys.

You came very close to gold that year. How much do you remember from the final against Serbia?

That it was frustrating not to win the gold medal. This final was very intense and we lost on this last shot, that was very, very frustrating because if was a buzzer beater. I wish I had won the title this year. That would have been so amazing. The Serbian team played very well. They had some great players.

How much did these 2 international experiences help you in your development?

It helped me a lot. First, by gaining experience at international level, as you play against teams and guys that you don’t play in the United States, guys who play a different kind of basketball, who play in a different way that I am used to and it is always a great learning experience to play at this level. I learned a lot about my game, worked on my basketball IQ and also on how to play with some international rules. I really enjoyed it and those international experiences were very positive and constructive for me, both on a human level and basketball wise.

What was your first reaction when you heard 3x3 made it to the Olympics, for you who are a 3x3 pioneer?

I was so happy that 3x3 was selected as a new discipline for the Olympics. It’s a great achievement for basketball and a great recognition for 3x3 and its growth. More and more people play 3x3 and it will be very exciting to see it at the Olympics. It’s a spectacular game and the fans are going to love the tournament. I am sure that a lot of people are going to follow the games in 2020. I am really looking forward to see the 3x3 at the 2020 Olympics!

For those who don’t know the 3x3 game, how would you describe the game and what would you say are the most important qualities to shine in 3x3?

It’s very physical and you have to play smart because it’s half court basketball. You develop your court vision very fast and you have to think quick! As there are only 6 players on the court, the mistakes you do can be pointed out very fast too (smile). It’s a bit different than playing basketball, but you learn a lot about the game also by playing 3x3. It’s very useful for basketball players to play also or to experiment playing 3x3.

What are the chances we get to see you play 3x3 again?

I don’t know when it would happen but I would love to play 3x3 again. I really enjoyed playing in that kind of basketball and I learned a lot during my time playing 3x3. The Olympics are a great window of opportunity, but as I play in the NBA, I don’t know about it. Only the future will tell, but winning a gold medal with Team USA at the Olympics would be an amazing experience!

*The interview was originally conducted in April. Thank you to Rondae, the Brooklyn Nets and Michael Da Costa.