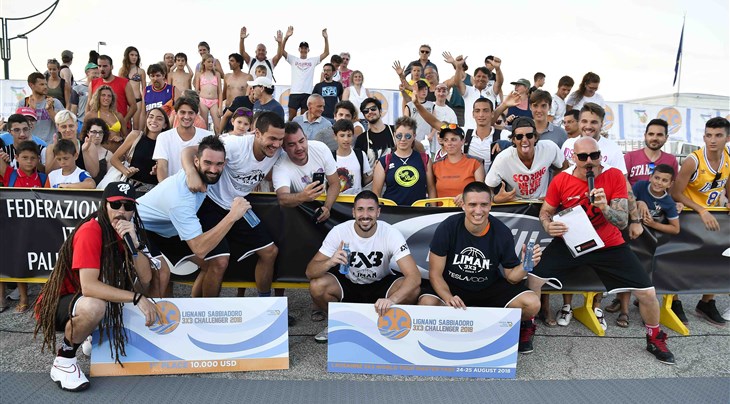 The number 2 team in the world had a pitch perfect preparation for the start of the FIBA 3x3 World Tour in Saskatoon, Canada at the end of the week, on July 21-22. They won every single game before the 10-minute limit, including a 21-17 defeat of 2-time World Tour winner Ljubljana (SLO) in the final.

Ljubljana was up 14-12 with 3 minutes to go but sharpshooter Stefan Kojic turned the game upside down with two tough 2-pointers to tie the game at 14 and then give his team a 17-15 lead.

Blaz Cresnar aka 'Birdman' dominated in the paint and scored 3 straight points for Ljubljana but Liman star Stefan Stojacic nailed a cold-blooded 2-pointer and his teammate Aleksandar Ratkov scored the game-winning free throw from the line.

With this win, Liman Tesla Voda not only took home the 10,000 USD cheque and became the overall leader in season earnings (42,000 USD), they also secured a ticket to the FIBA 3x3 World Tour Lausanne Masters, their 7th out of 9 Masters this year! Only Mexico City and Hyderabad are still on their list!

A new season has started for Ljubljana, who had missed out on a World Tour ticket in 5 consecutive Challengers. They are now guaranteed to play in 3 Masters after they received 2 World Tour invitations based on their 5th place rank in the FIBA 3x3 Team Ranking on November 1, 2017.

The other 4 teams, who have already secured their spot in the Olympic capital are Novi Sad (SRB), Zemun (SRB) [both based on ranking], Riga (LAT) and Humpolec Bernard (CZE) [the latter 2 after reaching the final at the Lipik Challenger in Croatia].

For the first time ever Italy was hosting a 3x3 Challenger, 4 of the Top 7 teams in the world showed up and 16 teams from 9 different countries.

The next Challenger will be held in Ventspils, Latvia on July 28-29.