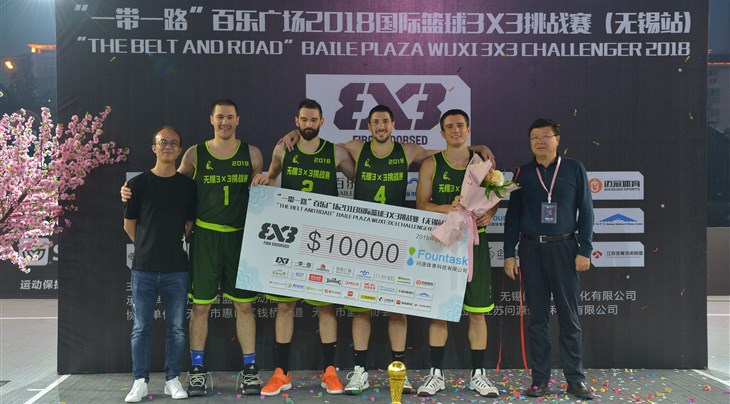 For their first appearance on the pro circuit this year, Liman were impressive, ending up with a clean 5-0 record, with 4 of these wins coming before the limit. Last year's World Tour regular season MVP Stefan Stojacic picked up where he left off: the 29-year-old led all scorers in Wuxi with 38 points.

In the final, Liman jumped off to a 9-1 win on a Stojacic long bomb. Humpolec crawled back in the game and made it a 3-possession game (11-16) with 2 minutes to go. But the Serbs continued to fire from behind the arc and Stojacic swished one last 2-pointer for the win.

With this win, Liman qualify for the Utsunomiya Masters, their 3rd World Tour event for the season already. Based on ranking, they already earned a ticket to the Chengdu and Prague Masters.

Humpolec may have lost the final but they had reasons to celebrate. Coming to China as the 16th team in the world, they upset the number 1 team overall and 2-time World Tour winners Novi Sad (SRB) in the semi-finals in a 21-20 thriller. They stamped their ticket to the Utsunomiya Masters (their first guaranteed World Tour event this year) and moved up to the 12th spot in the FIBA 3x3 Team Ranking after the event. Oh and their star player Roman Zachrla took home the MVP trophy!

Next challenger this weekend in Huaian, China (May 12-13) with Liman, Novi Sad, Ljubljana (SLO) and Belgrade (SRB) - in other words, 4 of the top 8 teams in the world.