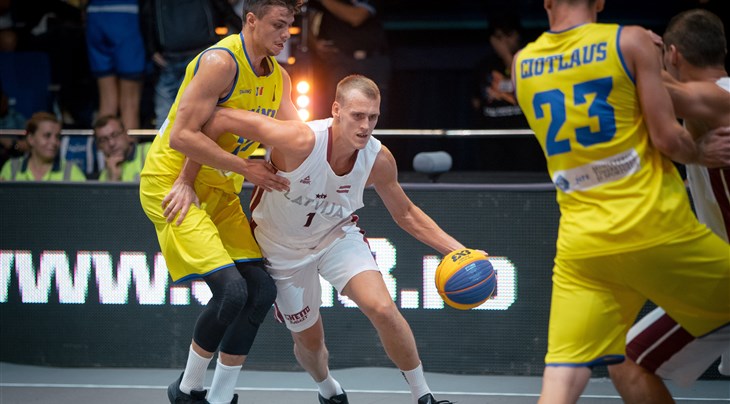 Last year they came out of nowhere, this year they were more expected than Eminem's response to Machine Gun Kelly.

The Latvians just clowned on their opponents in the Bucharest Metropolitan Circus on Friday. They won both games before the limit, a 22-11 KO of Hungary and a 21-10 beat-up of Romania.

Edgars Krumins and Karlis Lasmanis were the co-leaders of the scoring charts on Day 1 (tied with Dusan Bulut), though the 24-year-old Lasmanis dit it with a little more style.

To be fair with Serbia, they also were undefeated on Day 1 though they spent a lot more time on the court. As a matter of fact, none of their 2 games finished before the 10-minute mark. A 20-15 narrow win against Spain followed a 20-10 defeat of Bosnia and Herzegovina.

In the women's category, France won the game with the largest margin on Day 1, a 22-5 annihilation of Belarus. Les Bleues went on to take down Czech Republic 22-10 in their last pool game. The dynamic Migna Touré showcased a mean crossover that convinced us to name her the player of Day 1. She led all scorers (men and women) with 17 points in 2 games.

France were the only women's team to remain undefeated on Day 1 as Italy, Belgium and Hungary all dropped 1 game in Pool D and the 2016 European champs Hungary were sent home on points scored (they needed 3 more points in 2 games to qualify).

The other 12 teams in the competition will make their debut on Day 2. No less than 4 quarter-matchups are already known.