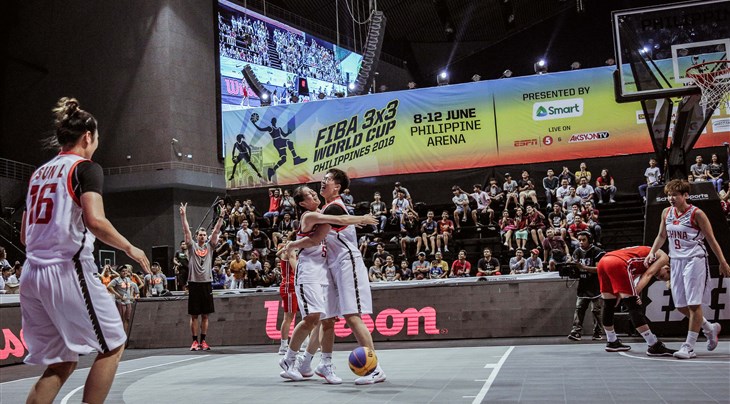 Team of the Day: Latvia (men) and China (women)

Latvia were superb on Day 1, staving off a tough Ukraine unit, 21-18, before outclassing Jordan, 22-13. The Latvians were led by Karlis Lasmanis, who tallied 17 points total in their 2 victories. Latvia are now tied at the top of Pool D with Croatia, who also won their two matches.

As for the Chinese, they had two nail-biters, but they still ended the day unscathed with a 2-0 slate. China slipped by France, 16-14, and then had to scramble in the end before snatching victory from the jaws of defeat against Switzerland, 21-20. In both games, Li YingYun shone brightly as she scored 18 points in all.

Game of the Day: China v Switzerland (women - Pool B)

It was an energetic start to the FIBA 3x3 World Cup 2018 filled with close games like Latvia's win over Ukraine (men) or Germany's holding on to beat hosts Philippines (women), but the game of the day had to be China against Switzerland. China seemed in control of the contest till the dying minutes, when the Swiss made a stirring comeback capped by an close basket from Nancy Fora that gave them a 20-19 lead. They failed to close out on dead-shot Li YingYun in the near corner, though, and she made them pay by hitting the game-winning two.

Hicks is known for talking a lot in-game, but he walked it like he talks it as he drilled 18 points in total to lead the scoring for all men. He torched Indonesia and Slovenia with 9 points in each of Poland's big wins.

This dude's got more range than Marvin Gaye #3x3WC #WatchUsPlay

Palomares, for her part, exploded for 9 points in Spain's 18-12 win over Germany even as she followed that up with 5 points in their second triumph of the day at the expense of Hungary, 19-14.

Two-point shooting is an all-important aspect of 3x3, and Li epitomized this on Day 1, hitting 8 twos in all. She splashed 3 times in China's tight win over France, and she was the hero of their escape act against Switzerland by nailing 5 twos, including the game-winner.