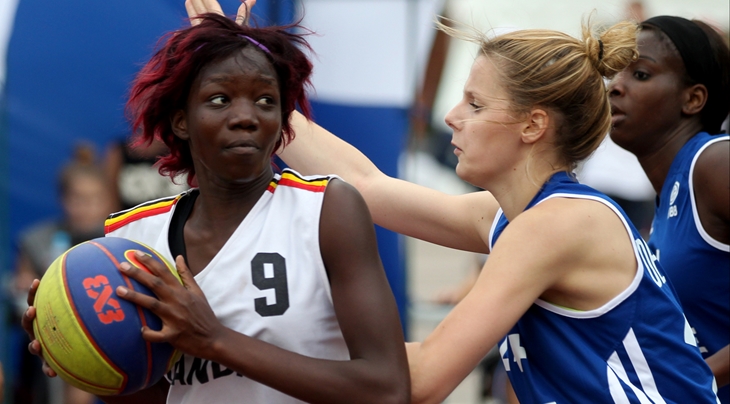 The 25-year old Lamunu, who has just been crowned basketball player of the season in Portugal where she was featuring for Bo-Viagem Angra Acore, will lead the Ugandan charge at the East African country's second appearance at the FIBA 3x3 World Cup following their debut in 2014 in Moscow, Russia.

"THIS IS VERY BIG FOR US AS UGANDA. WE ARE REPRESENTING THE ENTIRE AFRICAN CONTINENT. IT IS A VERY BIG PLATFORM FOR US AND GIVES US A CHANCE TO BECOME A POWERHOUSE WHEN IT COMES TO 3X3 BASKETBALL" - Lamunu.

In an exclusive interview with FIBA.basketball, Lamunu admitted that playing at this international stage in national team colours is always an honour and after shining at club level, it is about time she replicated this form for her country.

"It means a lot to me to be on the national team once again. A lot has changed since the last time I was there (at the FIBA 3x3 World Cup 2014 in Moscow). I am excited to see what it is right now and how everything that has changed for 3x3 because back then it was just starting," she explained excitedly.

Uganda find themselves in the "Group of Death" Pool C along with the reigning world champions Russia, two-time world winners USA, Iran and Andorra.

"We are in a tough pool with USA and Russia but I think that we can win a few games. I hope that we can do our best to prepare ourselves for the tournament and make sure that we compete," she pointed out.

Lamunu will be looking to fellow teammate from 2014 Jamila Nansikombi who has mastered the art of 3x3 basketball, top scoring at the FIBA 3x3 Africa Cup 2017 in Lome, Togo with 44 total points at the inaugural event. Sarah Ageno, another versatile player along with Ritah Imanishimwe complete the Ugandan roster that will be looking to do well against the odds staked against them in the pools.

"This is very big for us as Uganda. We are representing the entire African continent. It is a very big platform for us and gives us a chance to become a powerhouse when it comes to 3x3 basketball. It is a big opportunity not just for us as players but also as a country," Lamunu said.

She was chosen by the Women's Basketball Coaches Association (WBCA) as their choice of National Association of Intercollegiate Athletics Player of the Year 2017.

Uganda finished 14th at the 2014 edition in Moscow and will be hoping they can perform better this time round in the Philippines.