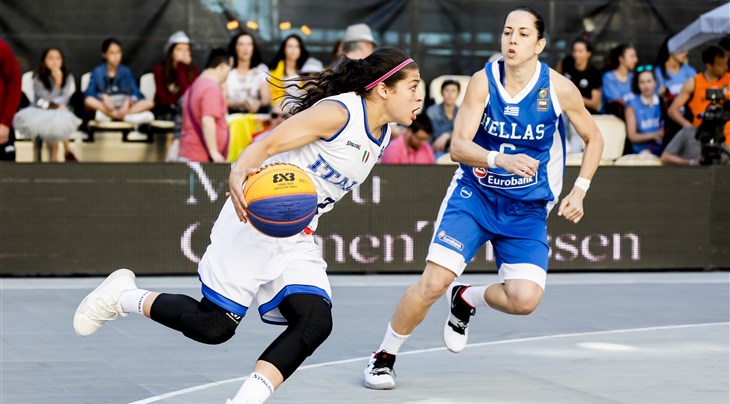 Just 1 week after winning MVP at the 3x3 World Cup, Rae Lin D'Alie was back at it, dishing out assists more delicious than lasagna to teammate Marcella Filippi, who was a joint top scorer on the opening day of the Andorra Qualifier with 18 pts. Italy finished both games before the limit: 22-7 against Greece and 21-10 against the hosts.

Spain also finished with a perfect 2-0 record in Pool A. Their star Paula Palomares had a 3rd best 16 pts combined in the wins against Azerbaijan and Andorra.

With 2 more games tomorrow, nothing is set in stone just yet but Italy and Spain look like they will be competing for 1st place, which qualifies for the Europe Cup directly.

The teams ranked 2nd and 3rd advance to a semi-final round to face the 3rd and 2nd of Pool B respectively. The winners of these 2 games also get an invite to Bucharest, host of the Europe Cup.

Pool B is complete chaos after the heavy favorites Hungary lost their opener against Serbia. Europe Cup 2016 MVP Dora Medgyessy had herself a day with a tournament-leading 18 points on the day. Nevertheless, after 2 games, Estonia, Hungary, Latvia and Serbia are all tied with a 1-1 record., with just 2 games left: Estonia-Serbia and Latvia-Hungary. The highest number of points tie-breaker will be required to decide who finish 1st and get the direct pass to the Europe Cup and who finish 3rd and get a last chance to make it to Bucharest.

In the men's category, things are pretty clear in Pool A. Andorra and Greece are already out and Czech Republic and Slovenia are guaranteed to advance to the semi-finals. They will face each other tomorrow to determine who get a chance to meet the 1st or 2nd team in Pool B in the semi-finals. Since the semi-finals winners and the winners of the 3rd place game get a ticket to Bucharest, both teams head into Day 2 with a 75% chance of getting to the Europe Cup.

The 4 teams in Pool B are tied with 1 win after Ukraine upset the recent World Cup silver medalists Netherlands thanks to Stanislav Timofeyenko, who topped all scorers with 18 pts. But things are pretty simple: the winners of Netherlands-Switzerland and Hungary-Ukraine tomorrow advance to the semi-finals.

Don't miss the second and final day of action live from Plaça Coprinceps on your favorite YouTube channel.