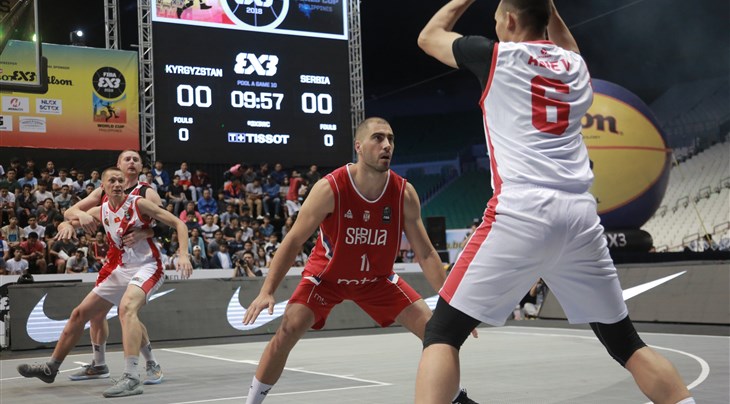 Here is what will go down on Day 5 as the teams aim to win or go home!

Mongolia have survived on grit just like the humans on Walking Dead, but it will take more than that to undo the defending champions. Serbia, it seems, have not been on full throttle yet, but they may just be pushed to limit by the Mongolians' noted physicality.

- None in national team competitions
- On the 3x3 pro circuit, Novi Sad (featuring 3 Serbia players) has a 2-0 all-time record against Ulaanbaatar (starring all 4 Mongolia players)

Latvia have remained untainted in this competition, but the Poles might well be their biggest test so far. Expect a high-scoring affair with the two of the top 3 scorers (as of this writing) hitting the court - Latvia's Karlis Lasmanis and Poland's Michael Hicks.

Slovenia were slow as a tortoise on Day 1, but they turned into jaguars on Day 3 to finish ahead in Pool B. Their prize is what should be a bona fide dogfight with the tough-as-nails Ukrainians, who are among the highest-scoring teams in the entire competition with 20.8 points per game.

Previous meetings: Slovenia and Ukraine have a 1-1 record with these rosters (Ukraine won at the Europe Cup Qualifier in Andorra and Slovenia won in the semi-finals of the Europe Cup in the Netherlands, both in 2017).

Canada have surprised more than a few with their well-balanced squad, but they are up to a serious challenge against the Netherlands. Michael Linklater and co will have to find a way to stop Jesper "The Job" Jobse from getting the job done; otherwise, we'll probably see "The Flying Dutchman" Sjoerd Van Vilsteren and his crew in the Semi-Finals.

The Czechs snatched victory from the jaws of defeat against upstarts Italy on Day 4, but they'll have their backs against the wall again when they face defending champions Russia, who want to bounce back in a helluva big way after losing to Team USA.

Previous meetings: Russia has a 2-0 record against Czech Republic (World Cup 2014 semi-finals and World Cup 2017 quarter-finals) though the Czech roster has been completely revamped since then.

So French 🇫🇷 and so clean: Johanna Tayeau was our player of Day 3 at the #3x3WC #WatchUsPlay

Spain are proof that the seedings don't necessarily reflect the depth and desire of each team. Led by their very own Speedy Gonzales in Paula Palomares, Spain have been nearly unstoppable. France, though, have the talent to permanently hinder the Spaniards' progress.

Previous meetings: Spain beat France at the Europe Cup 2017 France Qualifier but only 3 players are here at the World Cup (Alice Nayo for France, Aitana Cuevas Mediavilla and Paula Palomares for Spain).

In what should be one of the most colossal collisions of the Quarter-Finals, the top-seeded Chinese face last year's World Cup bridesmaids, Hungary. The Hungarians have to try and cool off Li Yingyun's Sichuan-chili-hot shooting, while China need to make sure Bettina Bozoki doesn't get going because she can cook it with the best of 'em.

Rae Lin D'Alie has been one of the most scintillating players so far, but even she may not be able to carry Italy past the undefeated Americans. Fueled by Oregon Duck power, the United States have rolled over every opposition so far, and all signs point to another win in the Quarter-Finals.

Previous meetings: USA beat Italy in the pool stage of the FIBA 3x3 World Cup 2016 (but Marcella Filippi is the only player left from that game).