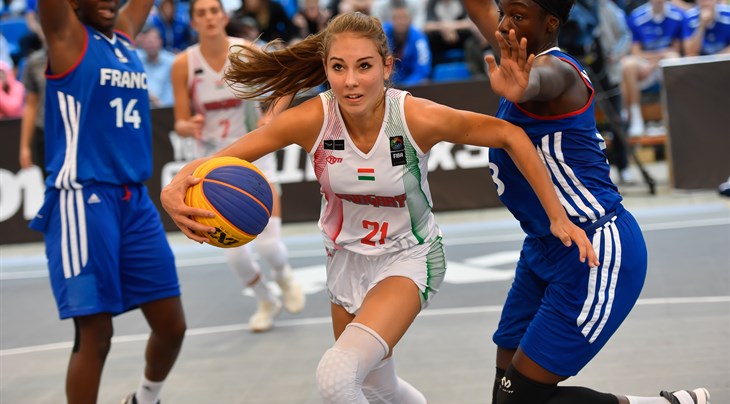 "Before the 3x3 season, I had nearly one thousand followers on Instagram," the 17-year-old explained to FIBA.basketball.

Toth got our attention at the FIBA 3x3 U18 World Cup in Chengdu, China, where she finished 9th overall in scoring and led Hungary all the way to the semi-finals.

"The funny thing is we had lost both our games the first day and only qualified to the quarter-finals by one single point!"

Two months later, the Budapest native basically took over at the FIBA 3x3 U18 Europe Cup. In front of her family, who made the short trip to Debrecen, Orsolya topped all scorers, helped Hungary win gold and was named MVP of the competition.

And she did it in style: crossovers, defender on the floor. After FIBA published her video mixtape of the tournament, things got viral.

To this day, this mixtape remains the most successful video of all time on FIBA3x3’s Facebook channel, with close to 4 million views.

"There were A LOT of notifications. It was really exciting," the 5’9 rising star said.

"My new followers come from all over the world, really. I think mostly from the USA. They sent me a lot of interesting messages. I get coaches asking me about my future and some DMs saying "Marry me!" but I don’t reply to these marriage proposals!"

Despite her new fame, Toth has not hired a community manager or changed the way she posts, still mixing up basketball photos with quirky selfies.

And her number one goal is to focus on the game.

"I also get bad messages on Instagram you know, people saying I’m not that great or I can only drive right", she said.

"My priority is to improve as a player and I want to be better at 3x3. I like this game: the one-on-one skills, the short shot clock. I hope I can play again this year at the U18 Europe Cup (still in Debrecen) and at the Youth Olympic Games in Buenos Aires."

While others are doubting her skills or sliding in her DMs, Toth is somewhere in a gym near you. If she could win MVP and get to 40k followers without a left hand, what will happen to the Internet when she breaks ankles left and right?