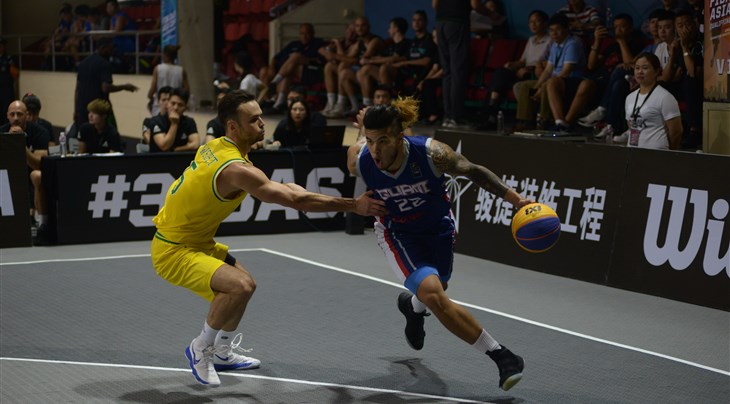 The 3-day qualifying draw started with a total of 10 games in the men's category. The teams are seeded in 2 pools of 6, with only each pool winners advancing to the main draw.

In Pool A, South Korea and Uzbekistan were the only 2 teams to have a perfect record.

South Korea started the day with a convincing 21-5 over Vanuatu, an island with a population of 270,000 that was making its first appearance in a FIBA 3x3 event. Sri Lanka fired from all corners behind the arc but South Korea switched to 6th gear in the final minute to win 22-18.

Uzbekistan used their size and strength to beat Malaysia (21-14) and they too faced a tougher second match-up against Thailand but pulled away in the final seconds (17-16).

Basketball powerhouses Australia and Iran remained unbeaten on Day 1. Australia started things off against a physical Guam team, that contested shots even when it shouldn't.

Owen Odigie was the owner of the play of the day and his teammate Andrew Steel carried the offensive load with his long-range bombs. The dynamic duo - who led Australia to bronze at the Asia Cup last year - later held Indonesia to just 8 points in a convincing win.

Mohammad Jamshidi shined for an Iranian team that still is new to 3x3 but showed a great deal of talent. Iran actually did better than Australia, beating Guam before the (10-minute) limit (22-15). If you're not looking forward to the Australia-Iran face-off tomorrow, you don't like 3x3 basketball.

Like Iran, Hong Kong also won their only game of the day, against a young Indonesian squad (17-13).

Tomorrow, the women will hit the court for their first day of qualifying draw play while 10 additional games will be held in the men's category.

Check our Game page for the other results of Day 1.