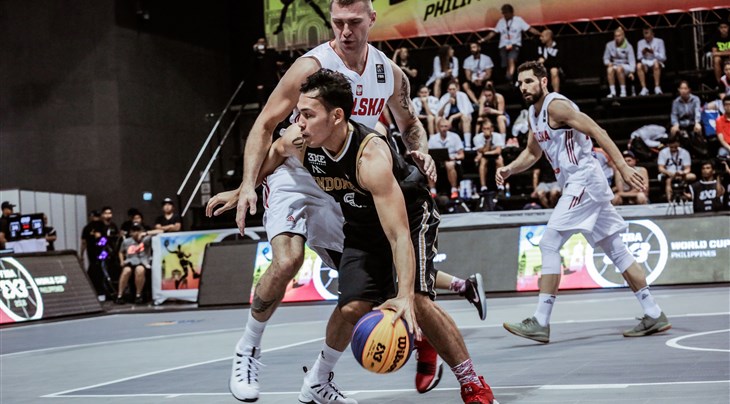 PHILIPPINES (FIBA 3x3 World Cup) - In many ways, Biboy Enguio of Indonesia feels at home playing at the FIBA 3x3 World Cup 2018 in the Philippines, since he did grow up and learn the game here.

Enguio, whose father is from Indonesia and mother is from the Philippines, was called up to the Indonesia national team fresh from finishing his collegiate career in Manila, and he has played for their national team, Timnas Basket, a few times since then.

Being called up to their 3x3 team, however, surprised him like cold rain on a hot summer day.

"I was surprised because I was on vacation here in the Philippines when the federation called me a few days ago," he said. "It was quite surprising."

Win or lose no matter what. Im still proud and happy to serve indonesia. The country who gives me an amazing career. the country who appreciate my talent. and the country who gave me importance. I just want to say thank you for trusting me 🇮🇩 and for the opportunity to serve you. Thank you indonesia! #blessed #overwhelmed #proud

This is Enguio's first foray into 3x3, and the adjustment has been significant. Let's also not forget that he met his team literally a day before the FIBA 3x3 World Cup 2018.

"I'm still adjusting to the rules of 3x3," he explained. "I also met my teammates just the day before the tournament began, though one of them was my teammate before in the IBL."

Indonesia lost both their assignments on Day 1, but they are hoping for better fortune on Day 3. Still, everything here has been a learning experience for them, especially for Enguio, who is all too happy to help raise the level of 3x3 in Indonesia.

"This is a good experience for us because the level of competition here is high, since it is the 3x3 World Cup," he said. "This will give us a ton of experience, and it'll raise our level of confidence in 3x3."