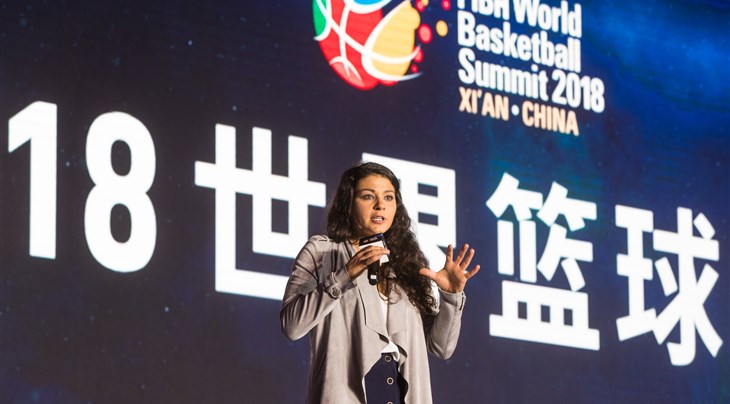 XI'AN - Basketball is often viewed as a sport for the tall. But over and over again, through its wonderful history, players of smaller stature have proved that with heart and determination, they can not only take part but even dominate.

One of the latest examples is Rae Lin D'Alie, the MVP of the FIBA 3x3 World Cup 2018 that was staged at the Philippine Arena back in June. The shortest player of the tournament at 5ft 4in (1.63m) turned out to be the best as she led Italy to the title in the women's category with stunning upsets of China in the Semi-Finals and then Russia in the Final.

It was a landmark achievement for a player who admitted that, as a youngster in the United States, some coaches doubted she could be the huge success in basketball she's turned out to be.

"When I was 16 I fell in love with basketball," D'Alie said at last month's FIBA World Basketball Summit in Xi'an, China. "At 5ft 3in, I was not highly encouraged to pursue it. This gave me extra passion and determination to pursue basketball."

So D'Alie embarked on a journey to fame that few - included herself - could have predicted. After high school, she looked to play basketball at the next level and did.

"When I was 19 years old, I went to the University of Wisconsin-Madison," she said. "I spent four years in the NCAA, an amazing experience. I learned the importance of seeing sport not only as a hobby but started to understand what it could like as a professional."

Then came another turn on her trip to success.

"In 2010, I had an opportunity. A door opened and I was able to go and play in Italy. This was a dream come true. On my father’s side, there is a heritage from Italy. I was so excited," she went on.

The story gets better. It was almost too good to be true.

"I packed my bags, went to Italy and landed in a city called Salerno,"D'Alie said. "While living there, I received my dual citizenship and found out that my great, great grandfather was from Salerno."

Then came an opportunity many players only dream of: D'Alie got to experience national team basketball.

"In 2012 I had the chance to play on the Italian national team," she said. "It was a good experience but just as fast as the door opened, it closed."

While she did not become an immediate hit with the team, the experience fueled her interest and passion.

"That moment produced a lot of motivation in me just to continue to pursue and play. Then I had a chance to go up north to the city of Bologna. After my first year, in 2016, two Italian teammates said 'Hey, Rae Lin, there's a 3x3 tournament in Salerno, would you want to go and play?' So I went down and experienced my first 3x3 basketball game. Wow, it left me speechless. It was incredible," she recalled.

For D'Alie, it was an awakening of sorts. That first tournament left her wanting more. She felt like a natural in 3x3. She understood immediately that more than anything else, to do well in the urban discipline, players required 'passion, energy, intensity, reactivity, creativity'.

"As a smaller player, it’s great because there is the same amount of space but six fewer people," she said. "That's great because I could get around."

For D'Alie, the fire had been lit inside her. She had a burning desire to compete in 3x3.

"In 2017, I experienced the first taste of FIBA 3x3 in Nantes, France, at the World Cup," she recalled. "It was great how the city teamed up with FIBA to create an event, not just sport but music, culture, integrating all aspects of the community to give the athlete, the fan, the city, a holistic experience. I was sold on this being my favorite sport."

The only downside was that the dynamo playmaker didn't win the title but exited in the Quarter-Finals. But the experience reinforced what she viewed as special about 3x3 and left her with no doubt it was a beautiful game she could excel in. She also began to look deeper at 3x3 and how it could flourish.

D'Alie and Italy didn't win in Nantes but a year on they did just that, in the Philippines. They beat top seeds China and then Russia last June to be crowned world champions.

D'Alie has become a passionate advocate for the game.

"If we had the space to be able to practice and the resource to be able to grow, and if federations continue to organize events, this could be a great thing for basketball," she said. "I love both basketball and 3x3.

"This is also a great opportunity for the fans because they're right in there with the players. It promotes community because you're in the population there (at events). You could be sitting next to a fan and can share your story, and the fan can share theirs and it’s a natural way to have the two worlds collide."

Another interesting aspect is that anyone that has played basketball has played 3x3, whether it's in suburban driveways, urban parks or beachside tarmacs.

"3x3's greatest advantage is that it doesn’t have to be integrated into society because it’s already in society," D'Alie pointed out.

By organizing events and encouraging players to form teams, 3x3 can continue to blossom.

"It's more about engaging and empowering people to be in that environment, to really just bring it to life," she said.

FIBA has put a lot of effort into helping 3x3 develop. This is evident in the fact that it will be make its debut as an Olympic discipline at the Tokyo 2020 Games. Taking part and reaching the summit of the game at the World Cup reinforced D'Alie's belief that 3x3 is only going to take root everywhere and flourish.

"FIBA had a vision that 3-on-3 could be exciting and a long-term part of basketball that could continue to give us joy," D'Alie said. "I think the response (at the 3x3 World Cup) was everything we hoped for, to have individuals and teams, nations and societies, able to experience pure joy and authenticity and just be part of a story.

"But this moment sums up to me what basketball is all about. People appreciate authenticity and being part of a story. As that happens, that transcends gender, transcends ethnicity, transcends even objectives. We all just want to experience that more and more."