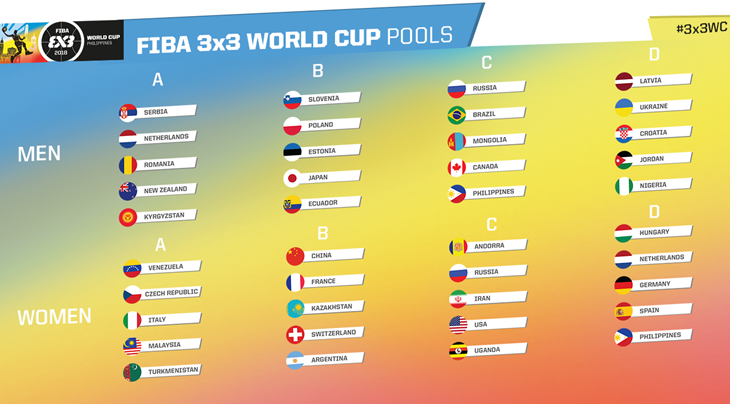 The reigning champions will get busy early in the competition. Serbia's men are in for a rematch of last year's World Cup against the Netherlands while Russia's women will meet 2-time winners USA.

Besides the Netherlands, Serbia will face 2014 European Champions Romania, New Zealand and Kyrgyzstan in Pool A.

Russia and USA's women will be joined by Andorra, Iran and Uganda in Pool C.

The seeding is conducted automatically according to the FIBA 3x3 Federation Ranking of each national federation at the April 1, 2018 cut-off date. As per FIBA 3x3 regulations, teams are seeded as follows:

The Filipino hosts are up to quite a challenge in Pool C's men category. Russia won bronze in 2014 and remained a 3x3 powerhouse since then. Mongolia upset both Australia and New Zealand last year to win gold at home at the Asia Cup. Brazil and Canada have not brought home any silverware in senior national team competitions but both countries have had successful professional 3x3 teams at the FIBA 3x3 World Tour.

Pool B will be highlighted by 2016 European champions Slovenia and also feature Ecuador, Estonia, Japan and Poland.

Last year's Europe Cup gold and bronze medalists will meet in Pool D. Latvia and Ukraine will have good company too with Croatia, Jordan and Nigeria.

In the women's category, the Filipino hosts had another challenging pairing in Pool D with last year's silver medalists Hungary but also Spain and the Netherlands, who finished 2nd and 3rd respectively at the Europe Cup in 2017. Germany will complete the pool.

2016 World Champions Czech Republic will star in Pool A, together will Italy, Malaysia, Turkmenistan and Venezuela.

Last but not least, Pool B features 2012 silver medalists France besides Argentina, China, Kazakhstan and Switzerland.

The top-two placed teams from each pool will advance to a standard knock-out round which starts at the quarter-finals stage, on the last day of competition.