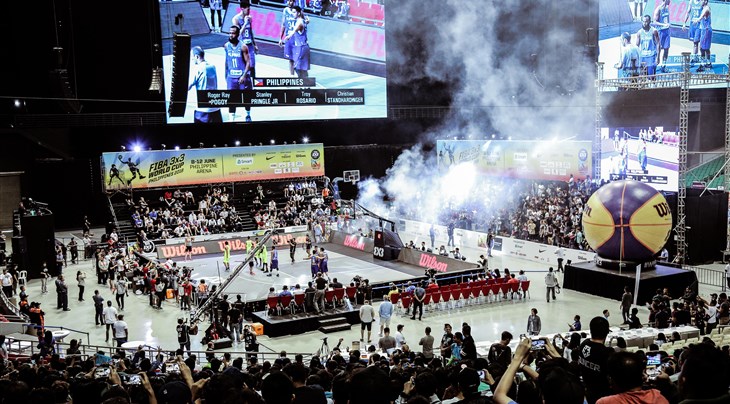 The highest amount of ranking points awarded to an individual player at the FIBA 3x3 World Cup went to tournament MVP Dusan Bulut (Serbia). Like each one of his teammates, 'Mr Bullutproof' earned 72,000 points for finishing 1st in the standings and 10,800 points for collecting at least 3 wins in the pool phase. He got an additional 48,854 points for his individual performance in scoring, shooting efficiency and several highlights categories. The 3x3 star finishing 1st in drives (15), 3rd in key assists (14), 4th in scoring (48 pts) and 7th in shooting efficiency (0,74 point per shot).

Janine Pontejos (Philippines) and Alexandra Stolyar (Russia) proved at the mixed Shoot-Out Contest that women could shoot better than men. Same could be told from the free throw percentage. Men shot a respectable 67% from the line. Women did it at a 73% clip. One player definitely boosted these numbers: Turkmenistan star Ayna Gokova had a perfect 12-12 from the line at the tournament.

Latvia had a forgettable tournament in the Philippines but you can't blame it on Karlis Lasmanis' shot selection. The 24-year-old star shot a whopping 85% from inside the arc (22/26) at the World Cup. The tattooed Dmitri Lipovtsev of Ukraine actually didn't miss a single 1-point shot during the entire tournament but only shot 8 times from inside the arc in 5 days.

A second shout-out to Alexandra Stolyar, who knocked down 50% of her shots from outside the arc in the Philippines (5/10), Marcin Sroka of Poland reached the same percentage in the men's category, but with a bit more volume (7/14).

Serbia were the only team that had an answer for the Netherlands' pick-and-roll game at the Philippine Arena. Two Dutch players finished the event as joint-leaders of the key assists category (focusing on passes leading to open shots at the rim) in Aron Royé and Dimeo Van der Horst (with 19). In the women's category, Sabrina Ionescu (USA) and Dora Medgyessy had only 15 but in just 5 games (meaning a better mark on average).

Just a coincidence? The 2 MVPs (Dusan Bulut and Rae Lin D'Alie) led all players in total number of drives with 15 and 13 overall respectively in 7 games. But even more impressive was Stanley Pringle Jr's 12 drives for the Philippines... in just 4 pool games.

What if we told you the leader in blocks was a woman? FIBA 3x3 Europe Cup 2017 MVP Anastasia Logunova used her 6ft 4in (1.92m) frame to swat 9 shots in the Philippines? No man had more than 5 actually. They were Duje Kaliterna (Croatia), Maik-Kalev Kostar (Estonia) and Sam Timmins (New Zealand).

Michael Lieffers (Canada) had a nice little jam session in South East Asia with 8 dunks in 5 games. For his return on the 3x3 scene, U18 World Cup 2015 gold medalist Sam Timmins was feeling it. He hung on the rim 6 times in his 4 pool games.

You can dig up all the FIBA 3x3 World Cup individual stats here.

For more information about the FIBA 3x3 individual stats, check out the statisticians manual.