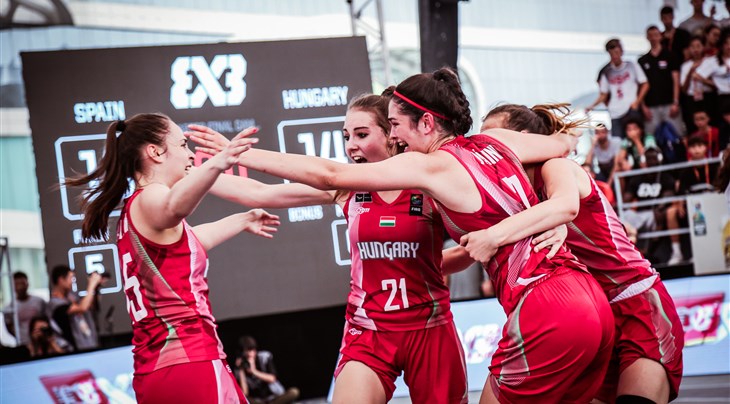 Twelve men's and 12 women's teams from a total of 17 countries stamped their ticket to the second largest city in Hungary after 3 qualifiers held in Bari (Italy), Szolnok (Hungary) and Voiron (France). They were seeded in 4 pools of 3 teams (in each gender) following the automatic seeding based on the FIBA 3x3 Federation Ranking on August 1, 2018.

The hosts will be in very good company in both the men’s and women’s categories.

Hungary have been ruling the women’s category of the FIBA 3x3 U18 Europe Cup since its first edition back in 2015. Two gold medals, one silver medal, no wonder why they’re the heavy favorites again. They’re bringing back two of 3x3’s rising stars Boroka Revesz and Orsolya Toth. This said, they will start the tournament in Pool D with a rematch of last year’s final against Russia (who beat Hungary in the Qualifiers) and a surprising Lithuanian team.

We get goosebumps thinking about Pool A with the #1 seed Ukraine, who did not lose a game in the Hungary Qualifier. But then also 2 basketball superpowers: Italy (who also had a perfect record, at the Italy Qualifier) and Spain (who only lost to Italy in the Qualifiers). Just get the popcorn ready already.

Oh and you think Pool B is any easier? We give you the Netherlands, who won bronze last year but also the Czech Republic, who won silver in the last World Cup (and feature the #1 player in the world in the category Alzbeta Levinska). We almost forgot: Belgium are sending a loaded team, starring Billie Massey – only the MVP of last year’s FIBA (Basketball) U18 European Championships, no big deal.

Last but not least, the 2016 champs France are back and will have good company with Latvia (who beat them at the France Qualifier) and Israel, who won bronze at the U18 Europe Cup back in 2015.

Things won’t get any easier for the hosts in the men’s category. Hungary and their star Ralf Martinez end up in Pool C with Italy, who were unbeaten at home in the Qualifiers and Serbia, who looked as impressive as their senior national team at the Hungary Qualifier.

The #1 seed Ukraine (who made it to the quarter-finals at the U18 World Cup last season) winded up in Pool A with a Czech Republic team which was undefeated at the Hungary Qualifier and Germany.

We’ll be looking forward the matchup between the #2 seed Romania and a super-talented Spanish team, which had a perfect record at the Hungary Qualifier. And don’t sleep on Greece , who will make their debut at the U18 Europe Cup.

Last but not least in Pool D, with last year’s 2 finalists Belgium and the Netherlands out, France are looking to sit on the throne again like they did in 2016. France and their main rivals in the pool Russia both went undefeated in the France Qualifier (and had a few highlights…). We’d usually say it’ll be mission impossible for Ireland but that’s what we thought before the Italy Qualifier, where they delivered upsets after upsets and clinched their first-ever trip to the U18 Europe Cup. Nothing’s impossible for that team anymore.

Fans can find more information about the event on the official website and react to the seeding on social media with the hashtag #3x3U18.