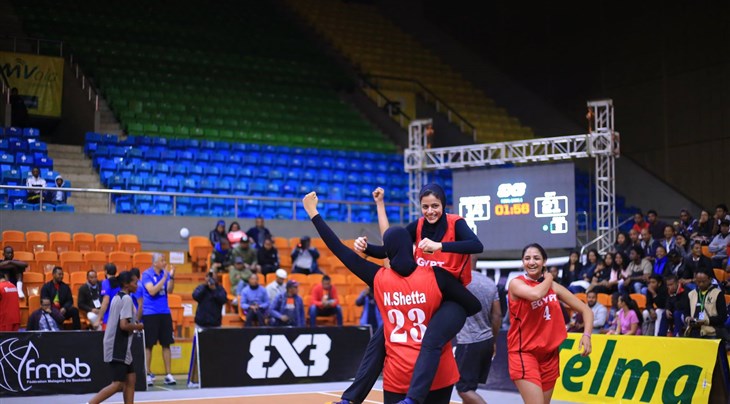 CAIRO (FIBA 3x3 Africa Cup 2018) - Renowned for her shooting prowess behind the arc, Soraia Deghady is basking in Egypt's dominance at the just concluded FIBA 3x3 Africa Cup Madagascar Qualifier and her new found love that is the shorter and quicker version of the hoops game.

The 23-year old Deghady, who made her FIBA 3x3 international debut over the weekend, admitted that this version of basketball suits her style that is fast-paced, intelligent, quick-thinking and outrightly exciting.

Egypt lost their opening two games to hosts Madagascar 9-8 and Democratic Republic of Congo 17-15 but a spirited comeback saw them defeat Uganda 21-14 to qualify for the Semi-Finals on a motivated note.

"IN THE BEGINNING, THE PROBLEM WAS I DID NOT KNOW THE FIBA 3X3 RULES BUT WORKING ON IT AND SHOOTING MORE AND MORE IS WHAT DIFFERENTIATE ME FROM ANY OTHER PLAYER"- Deghady

Led by the revived Deghady, Egypt found their feet and cruised to a 22-9 semifinal victory over the hosts avenging their opening loss before making light work of the Congolese 21-14 in a very entertaining final in front of passionate Malagasy fans who were watching their first official FIBA 3x3 tournament at home.

Deghady revealed that, "Our target was to reach the final but taking first place is a great achievement. It is not the same tempo as basketball. 3x3 has little assists. I must be a good shooter in order to win."

"This means so much for me that for the first time we participated, we won and that is a great achievement for us and for me winning the shoot-out contest also." "It is very important to us. We played so hard to qualify and we want to win the FIBA 3x3 Africa Cup as well and in the future make it to the World Cup and also the Tokyo 2020 Olympics. We are getting ready for the continental tournament in Togo."

FIBA 3x3 basketball will make a debut appearance at the Summer Olympics in 2020 and Deghady's excitement is a reflection of the general feel around the African continent.

"It is very important as well we want everybody to support us all the way. We need everybody to be there. We will work hard to reach our goal and make it to Tokyo."

"I think even though we do not have enough experience like the other teams we played against, we are better shooters and for sure we used intelligence over toughness,"she pointed out.

Egypt, Democratic Republic of Congo and Uganda in the women's category qualified for the second edition of the FIBA 3x3 Africa Cup set to be held in Lome, Togo from November 9-11.

Mali won the inaugural FIBA 3x3 Africa Cup title in the women's category last year in the same city but Deghady wants Egypt to go for the title and oust the West Africans.