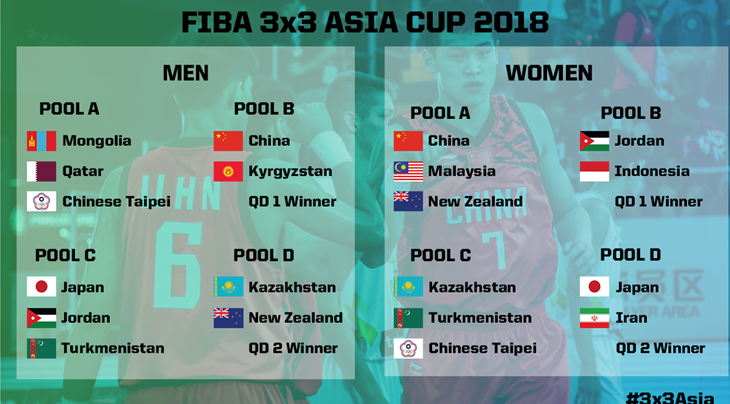 FIBA 3x3 Asia Cup men's reigning champs Mongolia will start the competition in Pool A, while women's 2017 winners Australia will have to earn their spot for the pool stage in the Qualifying Draw of the FIBA 3x3 Asia Cup, which will be staged on April 27-28.

Since 22 men's teams and 18 women's teams registered to play in the third edition of the FIBA 3x3 Asia Cup, the top 10 teams from each gender in the federation ranking on the November 1 2017 cut-off date got a direct ticket to the main draw while the other teams will need to go through a qualifying draw. This is how - in the men's category - Japan and Jordan, in Pool C, will meet the winners of Pool A in the Qualifying draw, which features 6 different teams (Sri Lanka, South Korea, Malaysia, Uzbekistan, Vanuatu and Thailand). The opponent of Kazakhstan and New Zealand will come from Pool B of the Qualifying Draw (Indonesia, Australia, Iran, Samoa, Guam & Hong Kong).

The reigning champs Mongolia will meet 2014 World Champs Qatar and Chinese Taipei in Pool A while hosts China will play Kyrgyzstan and Turkmenistan in Pool B.

In the women's category, reigning champs Australia will have to win their spot in the Main Draw by winning Pool B of the qualifying draw, which features Sri Lanka, Thailand and Samoa alongside Australia. The winners will meet Japan and Iran in Pool D. Kazakhstan and Turkmenistan will know their opponent after the Qualifying Draw as well, with Mongolia, Uzbekistan, Vanuatu and Hong Kong playing for a spot.

Hosts China are placed in Pool A alongside Malaysia and New Zealand. Indonesia, Jordan and Chinese Taipei have also a secured spot in Pool B.

The FIBA 3x3 Asia Cup 2018 will be played at the Nanshan Cultural & Sports Center in Shenzhen, China.

Note: Turkmenistan’s men and Chinese Taipei’s women switched pools with the Pool A Qualifying Draw winners on March 28 to secure that teams coming from the Qualifying Draw (in another city) do not enter the Main Draw on the same day.