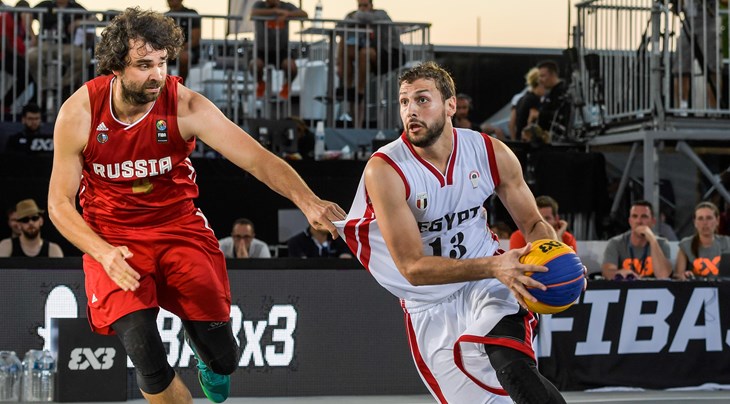 ALEXANDRIA (FIBA 3x3 Africa Cup 2018) - Born to an Egyptian basketball legend, Ahmed El Sabbagh finds himself in a place where success is not an option.

His father, the renowned Tarek El Sabbagh inspired Egypt to the 1983 FIBA Africa Championship (now FIBA AfroBasket) title registering a 6-0 unbeaten record on home soil in Alexandria earning the Pharaohs qualification to the Los Angeles 1984 Olympics in the USA.

In 1987, El Sabbagh Senior won the FIBA Africa Champions Cup with Ittihad Alexandria, a club where his son Ahmed is crafting his trade at the moment in an attempt to measure up to his father's achievements while writing his own story.

With two FIBA 3x3 World Cups (2016 and 2017) under his belt already and the inaugural FIBA 3x3 Africa Cup last year, the 33-year old has been at the core of Egypt's rise in the shorter version of the hoops game for the last two years.

Egypt finished in first place at the FIBA 3x3 Africa Cup Qualifiers in Madagascar in July, and Ahmed believes that along with his teammates, they will build on that victory to make a case for themselves at the final tournament set to be held in Lome, Togo from November 9-11.

"EGYPT HAS EMBRACED 3X3 BASKETBALL VERY WELL. IT IS SUCH AN INTERESTING SPORT. I AM VERY GLAD AND PROUD TO BE PART OF SUCH A SQUAD BECAUSE WEARING THE NATIONAL TEAM JERSEY IS AN HONOUR THAT EVERY PLAYER LOOKS UP TO."- El Sabbagh

Speaking to FIBA.basketball, El Sabbagh said, "We are getting ready for the FIBA 3x3 Africa Cup in Togo and focusing this year. As it is known, the ranking points for Tokyo 2020 qualification start from this tournament."

Playing at the Tokyo 2020 Olympic Games is a dream that Ahmed has tied his energies around and is ready to leave everything on the court to achieve this and live up to his father's success while further raising the El Sabbagh name in African basketball history books.

"Organising the qualifiers in Madagascar was very good. I enjoyed it, and it was such a good start to spread 3x3 basketball all over Africa. Egypt was honoured to take the first place."

Egypt missed out on a podium place in Lome last year after finishing fourth but El Sabbagh believes that coming out at the top is on top of their priority list next month.

However, to achieve this, they will have to overcome tournament favourites Nigeria, Cote d'Ivoire, Mali and Madagascar for them to get themselves onto the podium. "Nigeria for sure are a tough team but in general all the games in 3x3 basketball are not easy because any team can beat another. If you are not focusing and concentrating on the game you will lose for sure."

"Egypt has embraced 3x3 basketball very well. It is such an interesting sport. I am very glad and proud to be part of such a squad because wearing the national team jersey is an honour that every player looks up to."

Ultimately, for Ahmed and his Egyptian teammates, the focus is on qualifying for the Tokyo 2020 Olympics where 3x3 basketball is set to debut at the biggest multi-sport showpiece in the world.

"This is the goal and top dream in sports for any athlete to play or participate in the Olympics. It is the kind of dream that you think about and hope to make it come true. Inshallah."

A total of 12 teams will compete at the second edition of the FIBA 3x3 Africa Cup set for November 9-11 in Lome, Togo including Benin, Burkina Faso, Cape Verde, Côte d’Ivoire, Democratic Republic of the Congo, Egypt, Madagascar, Mali, Mauritania, Nigeria, Togo and Uganda.