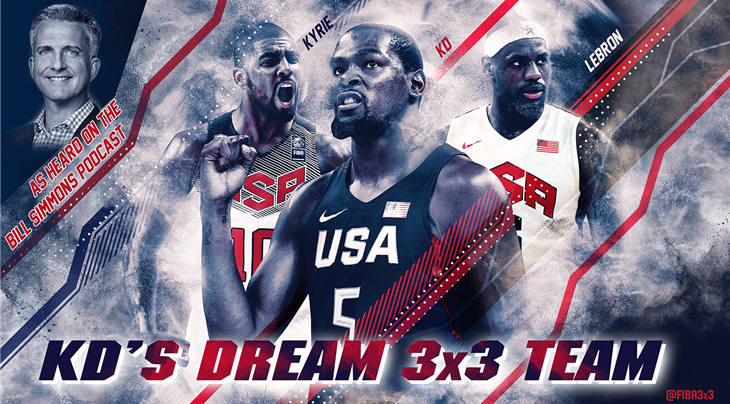 In the March 29 edition of his popular podcast, former ESPN writer and current 'The Ringer' CEO Simmons threw mailbag questions at Durant, including that 3x3-themed quiz, courtesy of reader Mike Jensen.

"I'm the biggest Kyrie fan in the world", Durant claimed.

The 26-year-old Kyrie Irving was named MVP of the FIBA Basketball World Cup in 2014 and also won gold at the 2016 Olympics (with Durant). His connection to streetball and 3x3 became even more obvious after he played the role of Uncle Drew - a long-retired player taking the 'young blood' back to school on the local playground - in several commercials and an upcoming movie.

"It would be me, Kyrie and probably..." (the NBA reigning champion takes a long pause)

LeBron James is a 2-time Olympic Gold Medalist. The 33-year-old teamed up with Durant on the 2012 London Olympics team.

"I didn't want to pick my teammates," Durant explained.

His host Bill Simmons concluded Durant was sparing himself the conundrum of choosing between his 3 NBA All-Stars teammates Steph Curry, Draymond Green and Klay Thompson.

No US men's national team has ever won gold at the FIBA 3x3 World Cup. NBA players Myke Henry and Alfonzo McKinnie led USA to silver in 2016. The women's national team won the title twice in 2012 and 2014, starring WNBA stars such as Skylar Diggins, Jewell Loyd and Chiney Ogwumike.