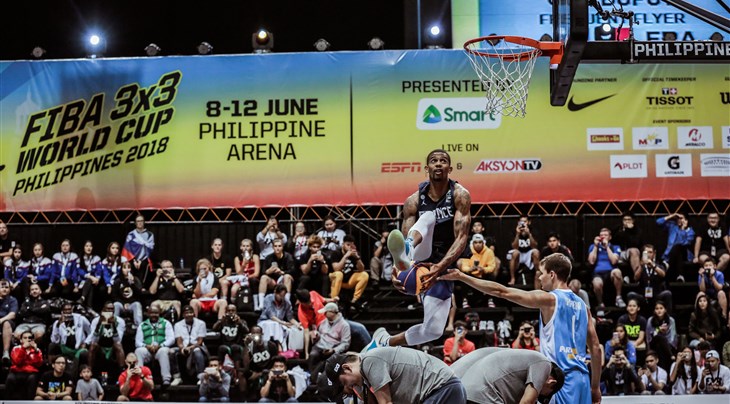 The flying Frenchman elevated and detonated with a total of 53 points combined from his two dunk attempts. In the first one, he caught the ball while soaring over two people, brought it between his legs and them slammed it down with more authority than your high school principal. In his second dunk, Dupuy caught the rock in mid-air while jumping over 6 people before unfurling a windmill even Dominique Wilkins would have approved.

Ukraine's Vadim Piddubchenko and Dmitry Krivenko also made it to the Final with qualifiers totals of 48 and 47 points respectively. Hometown favorite "Air David" Carlos, meanwhile, also advanced after scoring 47. Carlos is the first Filipino to advance to the Final in any FIBA 3x3 World Cup Slam Dunk Contest.

"AIR" David Carlos of the Philippines earns a spot to the finals of the Slam Dunk contest of the FIBA 3x3 World Cup @mbsportsonline pic.twitter.com/Sy6swRA6MD

His fellow Filipino dunker, Rey Guevarra, bowed out of contention and joined Poland's Piotr Renkiel and Lithuania's Gediminas Zitlinskas, who will all watch from the sidelines on Tuesday when the Slam Dunk Contest Final takes off.