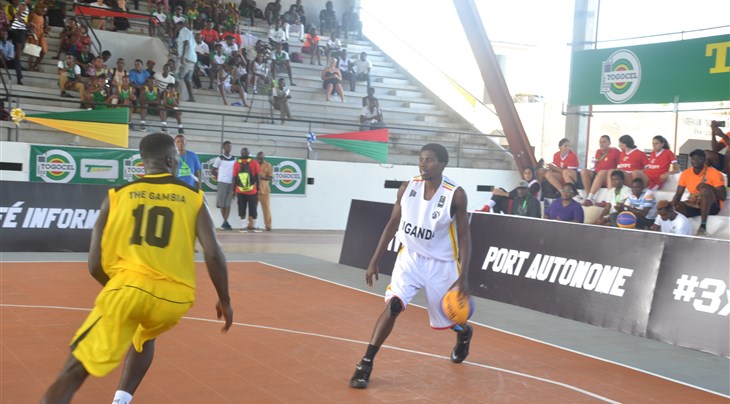 KAMPALA (FIBA 3x3 Africa Cup 2018) - Fresh from winning the National Basketball League title with City Oilers in Uganda on last week, Tonny Drileba has his eyes on the upcoming FIBA 3x3 Africa Cup set to be held in Lome, Togo from November 9-11.

Uganda is an emerging force in the shorter version of the hoops game and Drileba, the heartbeat of the East African side is eager to ensure that this journey continues to grace.

Born into a basketball family, Drileba grew up watching his elder brother Patrick Yiiki play and through admiration, he too decided to take on the challenge and in 2004, he started the journey.

Ten years down the road, he joined Ugandan basketball giants City Oilers and has since won four straight national topflight league titles and with this success eventual exposure and experience that has earned him a place on the 3x3 national basketball side.

"I started playing 3x3 basketball at Makerere University. I loved how competitive it was and how expressive one could actually be with the game."

"WE PLAN TO SURPASS OUR PERFORMANCE FROM THE LAST EDITION AND HOPEFULLY GO ALL THE WAY TO THE TOP TWO. - Drileba

He has since featured at the 3x3 FISU World University League finals in China as well as the inaugural FIBA 3x3 Africa Cup last year in Togo before representing Uganda again at the Qualifiers for this year's edition finishing fourth in Madagascar.

Drileba's agility and accuracy behind the arc as well as commitment have been at the centre of his rise to the high echelons of Uganda's 3x3 basketball scene.

"3x3 basketball is all about reading the game, identifying opportunities and loopholes and using them within a short period of time. 3x3 basketball improves game reading and awareness."

"Every international tournament is an opportunity for exposure. Playing against some of the top ranked players and teams around the continent and the world creates such a massive learning platform. There is so much new stuff to see about the game which helps me grow as a player."

"My first 3x3 tournament was the Sprite Inter-University 3x3 tournament and after that, I was part of the Ugandan team that played at the FASU All African University Games in South Africa and Nairobi."

With all this experience, Drileba has set his objectives high and along with his teammates heading to Togo, making it to the final is on their to-do-list and they will be hoping they tick that box.

"We plan to surpass our performance from the last edition and hopefully go all the way to the top two. Qualifying to the world level is the ultimate achievement. That would be something major."

"We have to prepare better. Going to Togo last year, we never had much time together as a team because we all had club commitments so this time, we are preparing much better ," he pointed out.

With two weeks to prepare for the continental showpiece, Drileba and his teammates have the perfect opportunity to go and conquer the continent.