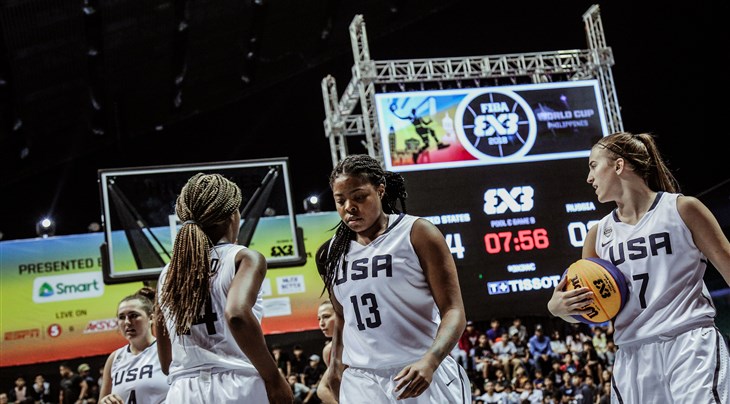 Team USA - composed of current players from the women's basketball team of the University of Oregon - completed a sweep of Pool C on Day 4 with wins over Uganda, 22-9, and defending champions Russia, 21-13.

A titanic tussle on the sport court #3x3WC

20-year-old Erin Boley acknowledged the gravity of their victory over Russia and credited their success to their chemistry.

"Beating the champions was definitely big for us, but we're just focused and moving on to tomorrow's games," she said. "Being teammates in college really helps our chemistry on and off the court."

The Americans begin their quest for the country's fifth FIBA 3x3 World Cup medal on Day 5, where they will play the second place team from Pool A. Team USA last won the women's crown in 2014 after winning it in the inaugural FIBA 3x3 World Cup in 2012.

The mission is not yet over for them, but nonetheless, the squad's top-scorer, Sabrina Ionescu, is proud of what they have done so far and is relishing the chance to share this experience with her fellow Oregon Ducks.

"I'm really proud with how we've played, but we still have some things to improve," she said. "We're just excited to be here, and we're enjoying the Philippines. These last few days playing has been really fun for us, traveling the world together to represent the United States. It has been an honor."

Coming into the tournament, Team USA - given their youth and inexperience - weren't among the top seeds, but they have climbed the ladder like crazy and have displayed skills that pay the bills. Now everyone has surely taken notice.