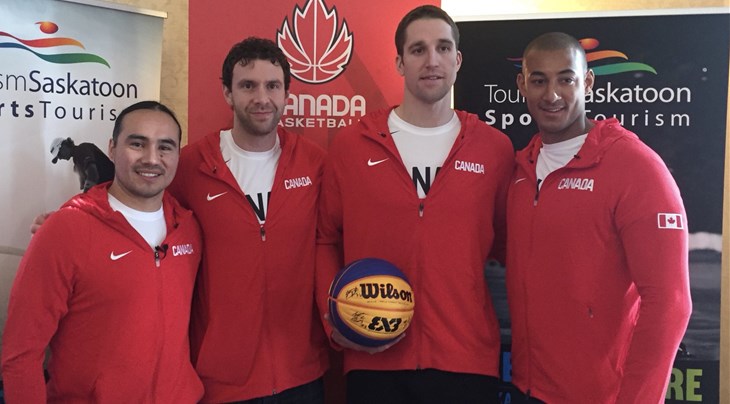 Michael Linklater (number one player in Canada and 50th in the world), Nolan Brudehl (2nd and 58th), Steve Sir (3rd and 60th) and Michael Lieffers (4th and 84th respectively) will represent Canada as the country competes in the FIBA 3x3 World Cup for the first time in history.

"Our team is both proud and excited to represent Canada at the FIBA 3x3 World Cup 2018," said team captain, Michael Linklater. "We have worked extremely hard over the past five years to make this a reality. Our goal is to have a strong finish and show the world why we are one of the best teams in 3x3. This is the first step to helping Canada qualify for the 2020 Olympics," Linklater said.

Team Saskatoon will have the honour of representing Canada 🇨🇦 this summer as the country competes in the FIBA 3x3 World Cup for the first time in history. #WeAreTeamCanada pic.twitter.com/xMT7yomhIb

The FIBA 3x3 World Cup 2018 is not a qualifier for the Tokyo Games - where 3x3 will make its Olympic debut - but represents an ideal preparation to compete against the best players in the world.

Though they will play their first World Cup for Canada, Linklater and his team have been a powerhouse on the 3x3 professional circuit since 2013.

A crossover specialist and relentless defender, Linklater won MVP honors at the Lausanne Masters in 2016 and was named Most Spectacular Player of the World Tour 2017 season by the fans.

Lieffers adds athleticism to the team with a knack for rebounds, blocks and spectacular dunks.

Team chemistry should not be an issue for Canada at the World Cup. Besides competing on the same professional team all year on the 3x3 pro circuit, Brudehl, Lieffers and Linklater played together and won a Canadian college basketball title for the university of Saskatchewan in 2010.

Canada became the first team to name their official roster for the World Cup. May 8 is the official deadline for federations to register their team.