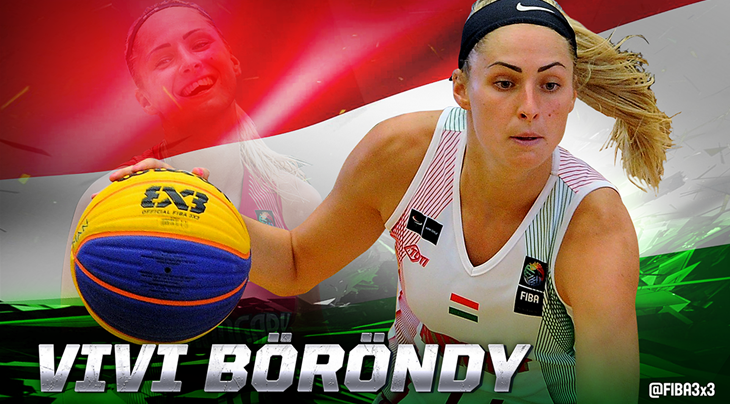 The 22-year-old took 3x3 by storm last year and led Hungary to gold at the FIBA 3x3 U23 Nations League in Colombo, Sri Lanka on August 20, 2017. She was named MVP of the tournament.

"I'm so surprised and happy," the Sopron native told FIBA.basketball.

"I'm so happy because I love this game but I never imagined I could become number one in the world, especially after just one year."

After shining in basketball youth categories for Hungary, Böröndy received a game-changing phone call at the start of 2017.

"I heard about 3x3 a few years ago and decided I wanted to play that game," she recalled.

"Then senior national team coach Andrea Karolyi called me and told me FIBA had launched a new U23 competition and invited me to the national team. Oh my God, I was so happy."

After a difficult start in the first 3 stages of the U23 Nations League (2nd, 2nd and 4th), Böröndy left Europe for the first time, knowing that her team had to sweep the last 2 stages in Sri Lanka to win the whole thing.

"We practiced all summer with the senior national team", the 5ft 9in (1.75m) player explained.

"It helped so much to learn from their experience of the game. We were so prepared and won both stages. Everything was so cool down there. This is the best experience of my life."

We asked the avid Harry Potter reader what was Hungary's magic potion: Böröndy replaced another Hungarian - Alexandra Theodorean - on top of the rankings.

"We're so focused. We work hard all summer, practice together and go to every 3x3 tournament, in Hungary and abroad. We're all preparing for the Olympics. It's my biggest dream!"

The FIBA 3x3 Individual World Ranking is calculated based on the 9 best results in FIBA-endorsed events played in the last 12 months. The number of points earned by a player at an event depends on the results of his team and his individual statistical performance.

Böröndy tallied 155,340 ranking points in the last 12 months. The Hungarian star edged out her teammates Vanessa Kovacs and Dora Szabo.