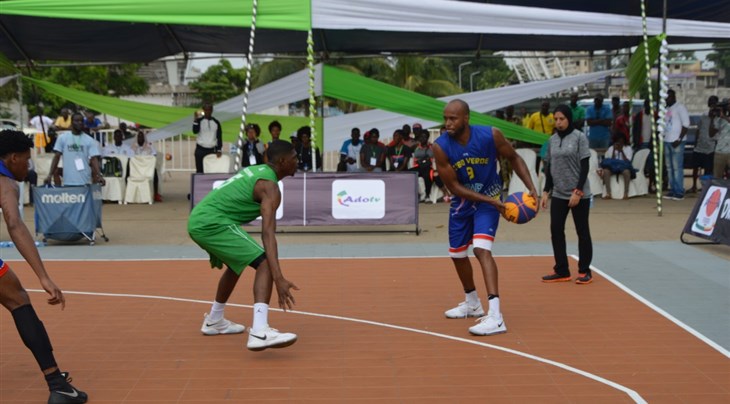 COTONOU (FIBA 3x3 Africa Cup 2018)- Host Benin put up a good showing on Day 1 of the FIBA 3x3 Africa Cup Benin Qualifier posting two wins out of two games in the men's category. They defeated Niger 21-13 and 17-8 against Burkina Faso.

It was also a 2-0 for hard fighting Cape Verde who defeated the reigning Champions Nigeria in a close game that saw the Islanders winning by 17-15, and went on to hold Burkina Faso to the ground by 12-10 all in Pool B.

Nigeria Captain, Abdul Yahaya who blamed lack of concentration for the loss to Cape Verde said he is sure that qualification is still within the reach of his team.

"The loss was unfortunate for us as a team. We don’t have any excuse to have let Cape Verde win that game but that notwithstanding, I want to assure our fans that we’ll give our best to qualify for the Final Round in Togo and go ahead to defend our title."

In Pool A, Cote d’Ivoire are holding sway with two victories over Mauritania 18-13 and Gambia 17-12 respectively while Mauritania took over Mali 19-15. Mali and Gambia have a win each save for Ghana that have lost all two games on the opening day.

In the women’s category, Cote d’Ivoire leads in Pool A with two wins in as many games 21-16 over Benin and 14-4 over Ghana.

In Pool B which features Nigeria who clinched a Second Place finish at the inaugural edition in Togo 2017, there is also Cape Verde, Burkina Faso and Niger, the battle is still on as all three teams have played just a game each save for Niger that lost two straight games.