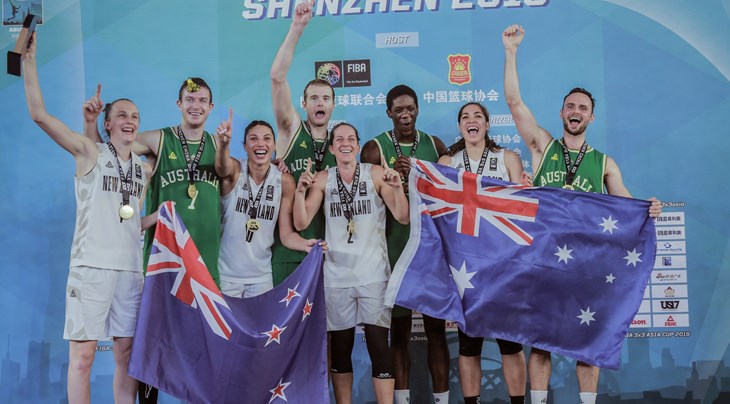 The 3rd edition of the 3x3 Asia Cup was the biggest on record with 39 teams (18 women's teams and 21 men's teams), 2,5 days of a qualifying draw in Changping and 3 days of main draw competition in the center of Shenzhen at the Nanshan Cultural & Sports Center.

Australia's men's team - last year's bronze medal winners - started their tournament from the qualifying draw and won their first FIBA 3x3 Asia Cup title with a perfect 10-0 record. Australia faced defending Asia Cup champions Mongolia in a final for the ages. Tournament top scorer Thomas Garlepp started the scoring for Australia, keeping them ahead for the majority of the game though Mongolia was never too far behind with strong man Delgernyam Davaasambuu charging to the basket. In the final minute, Mongolia tied the game at 15. Last year's MVP Dulguun Enkhbat was fouled with 1,5 seconds to go and had 2 chances to give Mongolia the lead from the line. However the 26-year-old missed both free throws. In overtime, Garlepp scored a cold-blooded contest 2-pointer for the win. He was later named MVP of the tournament.

After being narrowly edged out by eventual winners Australia in the semi-finals, Japan redeemed themselves in the bronze-medal game and defeated New Zealand in a 21-20 thriller.

In the women's category, New Zealand landed a big overtime win in the semi-finals against an unbeaten Team Australia thanks to a clutch two-pointer courtesy of tournament MVP Micaela Cocks. In the final game, they took on a China team who was more than just a 4-woman squad with the backing of the crowd. New Zealand won a nail-biting 14-11 defensive game where no players scored more than 5 points.

Australia's women lost their title but didn't come home empty-handed as they beat Japan in the bronze-medal game (17-5) thanks to tournament top scorer Rebecca Cole.

Fook Yee Yap (Malaysia's women) returned to defend her gold medal in the shoot-out contest. The 24-year-old hit all the money balls to beat the 2 male contestants and Madeleine Garrick (Australia's women) in the final.

Team of the Tournament: