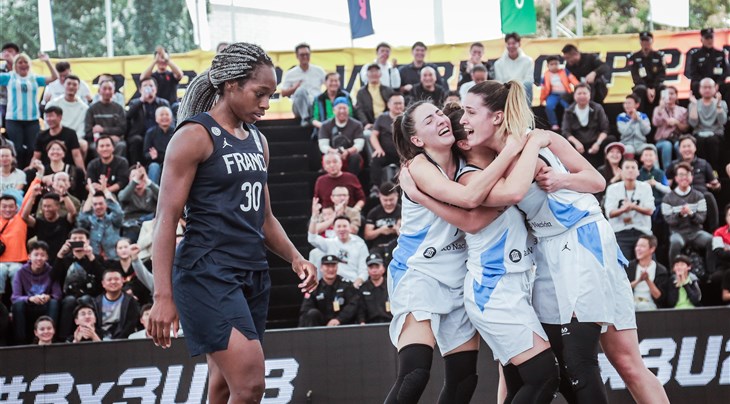 The last pool game in Pool C was just another reminder how crazy and unpredictable 3x3 can be. With the game seemingly over, Agustina Garcia intercepted a pass and found Julieta Mungo for the most exciting Tissot Buzzer Beater of the tournament so far.

🔥🔥🔥 BIGGEST SHOT OF THE TOURNAMENT: @Julimungo hits the @Tissot Buzzer Beater to knock out France 🇫🇷 and send @cabboficial 🇦🇷 to the #3x3U23 World 🏆 Quarter-Finals 🔥🔥🔥 pic.twitter.com/iqpeYbpv0f

France were the heavy favorites to win the U23 World Cup after dominating the FIBA 3x3 U23 Nations League this year. But Caroline Hériaud & co suffered back-to-back 1-point losses on Day 4, against Argentina and Japan, who topped the pool.

Germany won Pool A after winning a do-or-die game against Hungary, who also advanced to the semi-finals at the expense of Romania and Uganda and especially the Chinese hosts.

In the men's category, France had another big scare in Pool B against the Netherlands. But in overtime, FIBA 3x3 U23 Nations League MVP Charly Pontens put his team on his back and hit the Tissot Buzzer Beater for the quarter-finals. Russia will join 'Les Bleus' after finishing the pool stage with a perfect 4-0 record.

With @ffbb_officiel 🇫🇷 on the brink of elimination, @ciel_33 takes over the overtime and hits the @tissot_official Buzzer Beater #3x3U23 #fearthestache 👨