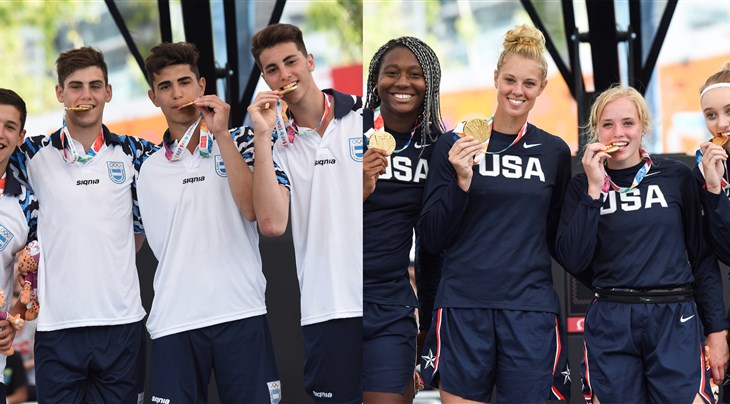 2014 Youth Olympic Games bronze medalists Argentina won gold at home after defeating Belgium in the final (20-15) in one of the loudest days in 3x3 history thanks to thousands and thousands of fans packing the stands and the surroundings of the 3x3 venue located in the Urban Park.

Argentina's Marco Giordano took over in the final scoring 11 points for the winners while Moussa Noterman had 10 for Belgium.

In the women's category, USA won back-to-back gold medals after dominating France (18-4) in the final. It's the third time that USA have won a Youth Olympic Games medal after Nanjing 2014's gold and Singapore 2010's bronze. This is the second silver medal France have earned this year in this category after the one they took home at the FIBA 3x3 U18 Europe Cup 2018 in September.

Aliyah Boston and Paige Bueckers dropped 6 points apiece for USA in the final.

In the bronze-medal game, 2010 Youth Olympic Games gold medalists Australia were up from start to finish against China and won 16-13 . In the Shoot-Out Contest, Mathilde Peyregne struck gold for France after scoring 9 points in 49 seconds. Katerina Galickova, from Czech Republic, won silver after getting 8 points in 44 seconds, 5 seconds faster than Argentina's Sofia Acevedo, who won bronze.

Fausto Ruega (Argentina) won gold at the dunk contest after defeating Russia's Nikita Remizov by unanimous decision in a fourth dunk play-off in the final after both dunkers were tied with 81 points. Niccolo Filoni (Italy) won bronze with 51 points.