Amsterdam Inoxdeals do it again at Kaunas 3x3 Challenger 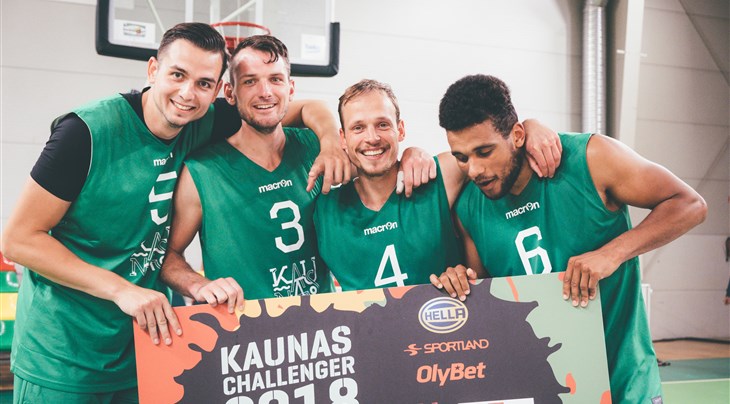 KAUNAS (3x3 Challengers) - Amsterdam Inoxdeals (NED) won their second Challenger of the season after edging out Belgrade (SRB) in overtime in the final of the Kaunas 3x3 Challenger on June 30 - July 1.

Just 4 weeks after taking home their first-ever Challenger in The Hague, the Dutch team continued their hot streak in Lithuania. Despite missing their top ranked player Jesper Jobse, they went undefeated over the weekend though they got a big scare in the final.

Down one with time running out, event top scorer Dimeo Van den Horst went hard to the basket, spin move and finished over Dragan Bjelica. In overtime, the other newcomer on the team Aron Rojié came off a screen, faked, set his feet behind the arc and splashed the 2-pointer for the win, the 10,000 USD and the ticket to the World Tour Prague Masters.

Since the Dutch had already secured their spot there in The Hague, third-place Moscow Inanomo (RUS) join Amsterdam and Belgrade in the Czech capital.

All 3 teams have now secured a ticket to 2 Masters this season.

Eight Prague Masters participants are now confirmed. The other 5 are Liman (SRB), Piran (SLO), Gagarin (RUS), Humpolec Bernard (CZE) and Ralja Intergalactic (SRB). The Prague Masters is the third World Tour event of the season and will be held on August 4-5 on the UNESCO World Heritage site of Wenceslas Square.

Four of the Top 20 teams in the world and a total of 16 teams from 10 different countries competed in Lithuania.

The next Challenger will be held in Lignano Sabbiadoro, Italy on July 14-15.