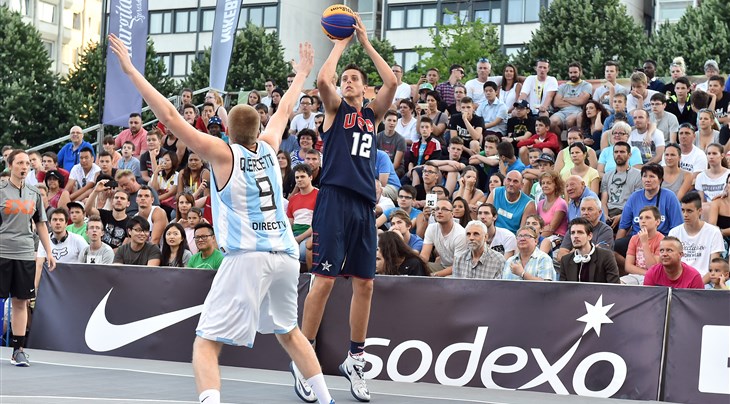 PORTLAND (3x3) - Two years before he joined the NBA (Portland Trailblazers) and 3x3 basketball became an Olympic discipline, a (then) 17 year-old Zach Collins got his first experience representing the US internationally. FIBA.basketball sat down with the 7-footer (2.13m) to speak about the FIBA 3x3 U18 World Cup 2015 and his special relationship with 3x3.

FIBA.basketball: Zach Collins, you played at the FIBA 3x3 U18 World Cup 2 years ago. How was the experience, besides you staying in Russia for a little while on the way back...?

Zach Collins: That passport issue wasn’t the most fun moment (laughs) but it was definitely a very fun and interesting experience for me. Look, people think that 3x3 is easy, but it is way harder than it looks. The rules are different; it’s a great way of learning a different way of playing basketball. It was a lot of fun to travel overseas, go to Europe, going to Hungary. That was my first time being away from home for a long time, and you always learn a lot from this kind of experience. It kind of helped me grow a little bit too, both as a basketball player and as a man, so it was a very positive experience.

What made you decide to play for the USA at 3x3 level?

I had a great opportunity and I decided to take a shot and represent my country at a bigger stage. I love to represent my country and when I knew that I could do so at 3x3 level, I couldn’t say no. I wanted to take advantage of wearing the USA jersey but also to live a basketball experience at a global stage. That was a very good experience and I learned a lot from it.

How different is 3x3 compared to traditional basketball? Did you struggle to get adjusted to this way of playing basketball?

It was tough at the beginning; I definitely struggle when I started playing 3x3. But I got used to it progressively, but it’s different from basketball. The game is fast, you never have breaks and you keep playing without stopping. It’s very intense, but I really like it.

You got to keep being focused and keep your energy at the same high level all the time. It’s a very intense sport; I really did like the experience. The pace part was a little tough, but the overall 3x3 experience was very fun.

3x3 became an Olympic discipline last month. What was your immediate reaction?

People are going to like 3x3, I am sure about that!Zach CollinsZach Collins

It’s going to keep growing and 3x3 is going to have a lot of new players and fans. It’s a positive sign for the discipline.

Do you still play 3x3 when possible?

I still do sometimes. The half court part is different from full court as there is no fast break, so you have to do other things to score. That helps you develop your I.Q, as you have to know how to move and create space to score and feel the game of the opponents. It’s another kind of basketball, but a very learning experience.

What would it mean for you to use your 3x3 experience to represent USA again, this time at the Tokyo 2020 Olympics?

Sure, I wouldn’t be against the idea. It’s a goal of mine to represent my country in any game, so if I have the opportunity to do so, I will absolutely do so. That would be an amazing experience. I am only good at basketball, so I can only play basketball or 3x3 (laughs)! If I have the opportunity to represent my country, I would be happy to do so.

Your former teammate at Gonzaga, Killian Tillie, is also known for being a solid 3x3 player... Hence, he helped France knock out your team in the quarter-finals at the FIBA 3x3 U18 World Cup 2015...

Yes, he loves that game. He is a very smart player and he had some great results with the national team at youth level on 3x3 basketball. He is a very athletic guy and he loves fast paced and the intensity on the game. It would be fun to face each other again in the future on a half-court somewhere in the world! (Laughs).