US 3x3 star Craig Moore: "Steph Curry's not the most athletic guy either" 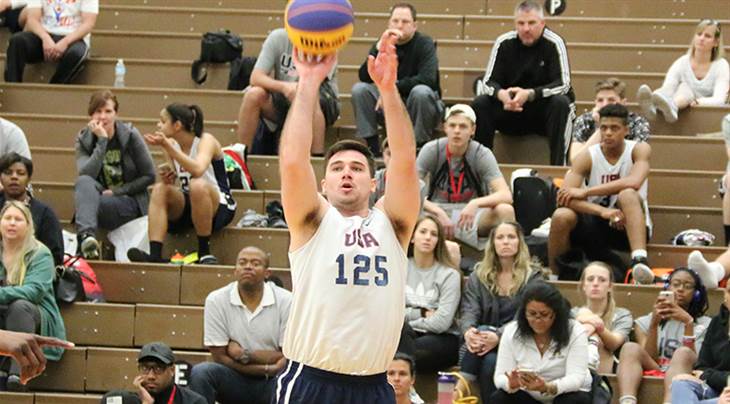 COLORADO SPRINGS (3x3 World Cup 2017) - They may not bang rims this season but the US 3x3 National Team will be a force to be reckoned with at the FIBA 3x3 World Cup 2017, explains team captain Craig Moore.

The sharpshooting Moore is no stranger to the 3x3 stage. Back in 2014, Moore, along with Team USA, won the FIBA 3x3 National Tournament. Shortly after, they’d hope to continue that championship run in the FIBA 3x3 World Cup but came up short against reigning champion Serbia in the Last 16, finishing tournament play in 14th place.

Three years later, Moore is back winning gold, this time playing a key role in Team Ariel’s nail-biting 22-19 victory over Team Harlem this past weekend at the 2017 USA Basketball Men’s 3x3 National Tournament in Colorado Springs.

His team secured a trip to France where they’ll represent USA Basketball at the 2017 FIBA 3x3 World Cup in Nantes on June 17-21.

Our 3x3 expert Drew Ruiz caught up with Moore to talk winning it all, playing alongside MVP Daniel Mavraides, repping for the red, white and blue and preparing for France in a few months.

What’s the feeling of coming out victorious this past weekend?
[It was a] great feeling. I think I can speak for my whole team and say we are definitely sore today (day after the tournament) after flights back to our respective cities. The whole tournament felt like a hard fought battle. We were fortunate to be shooting the ball very well both days, but that’s what we do.

What was your mindset entering the tournament?
Our mindset as a team was to stick to our principles. We have a certain way we play inspired by John Rogers, who played basketball at Princeton University for Hall of Fame coach Pete Carril. John has competed and won countless 3x3 tournaments around the US for the past 25-plus years. He is also individually responsible for getting all 4 of us on Team Ariel involved in the 3x3 circuit. 3x3 is fast paced and with the 12-second shot clock, players and teams can get frantic. John has always preached to play fast but not hurry, get a good shot every possession. Defensively, the exact opposite: force tough shots and play the percentages.

In 2014, you won the National Tournament in 2014. To you, how has the league changed since then?
The level of play in the US 3x3 National Championship has jumped each year higher and higher. Former top college players, current players from NBA, the D-League and Europe come to compete. They understand the differences between basketball and 3x3 as well, which makes the tournament even more competitive.

How has it been playing alongside your teammate Daniel Mavraides who won MVP this past weekend?
Dan is the epitome of a great teammate. His desire to win rubs off on all his teammates. Off-court, he keeps everyone smiling. He carried us in the championship game and made big shots all tournament.

What’s the feeling like to wear the USA across your chest and represent your country?
It’s an honor. Not many people get the opportunity to represent their country in anything. We don’t take this for granted and relish the opportunity to compete against the very best from around the world.

The USA team lost to No.1-ranked Serbia who’s had the same team for the past couple of years. How do you think the team matches up to come out victorious this time around?
Serbia’s resume speaks for itself. We are looking forward to the challenge of competing against the very best in France.

Your team may lack athleticism but fills the void with stellar shooting. How do you think the USA will hold up in France in June?
I’ll take that as a compliment. Steph Curry’s not the most athletic guy either. Still he’s doing pretty good in NBA. So athleticism is a nice attribute, but not the be-all and end-all. France isn’t going to be easier, but what is? We play to win.