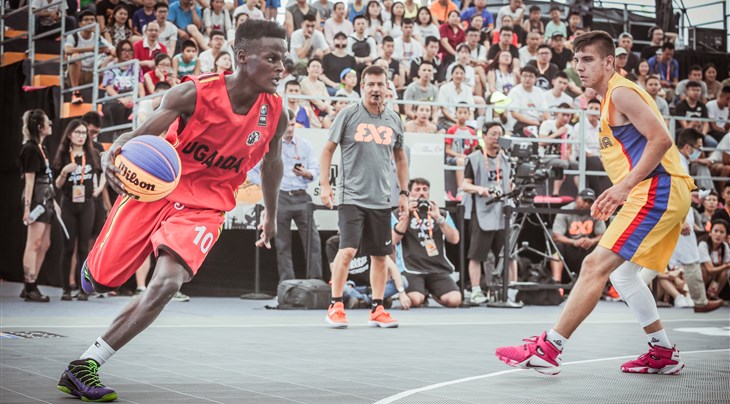 This is a debut appearance for the East African nation but the teenage quartet is daring enough to dream big even in the absence of their head coach Hamza Nyambogo who stayed back home but has confidence in them to compete favourably in Chengdu.

Nyambogo told FIBA.basketball that it is important that Uganda looks at the bigger picture and realistically gain as much experience as possible rather that get carried away with trying to win the tournament that has attracted the world’s best players.

Uganda is one of the leading countries in Africa that has implemented the Fast Track Program with an eye at qualifying for the Tokyo 2020 Olympics where 3x3 basketball will make her maiden debut as the shorter version of the hoops game.

"The Fast Track program is preparing Uganda towards the Tokyo 2020 Olympics. We have a good chance of qualifying for the Olympics based on our strong ranking and activities across the board."NyambogoNyambogo

"Currently, we are looking to expand our database across all age groups from U16 to U18, U23s and the senior players in both the men and women's categories to improve their quality because 3x3 is a highly skilled version of the game with high energy."

Over the weekend, Nyambogo saw off the four-man Ugandan team with one of two Fast Track Programs scheduled for 2017 that attracted 72 U18s from 16 schools in the Ugandan capital Kampala at Bishop Cypriano Kihangire Senior Secondary School in Luzira, a suburb.

Elvis Ssentongo, Fayed Bbale, Henry Okoth and Joseph Dramaza will be carrying the Ugandan flag high with the hope of being a part of the journey towards Tokyo 2020 showpiece.

"The Fast Track program is preparing Uganda towards Tokyo 2020. We have a good chance of qualifying for the Olympics based on our strong ranking and activities across the board."

Uganda has already registered success at the FIBA 3x3 U23 Nations League with the men finishing third and women in fourth place as the country slowly but surely makes baby steps to improve and get ready for the bigger challenges against the best in the game.

Ranked at 20th, Uganda will face Romania, Indonesia, Belgium and Jordan in Pool D with the top two qualifying for the Quarter-Finals and then knockout games through to the Final.