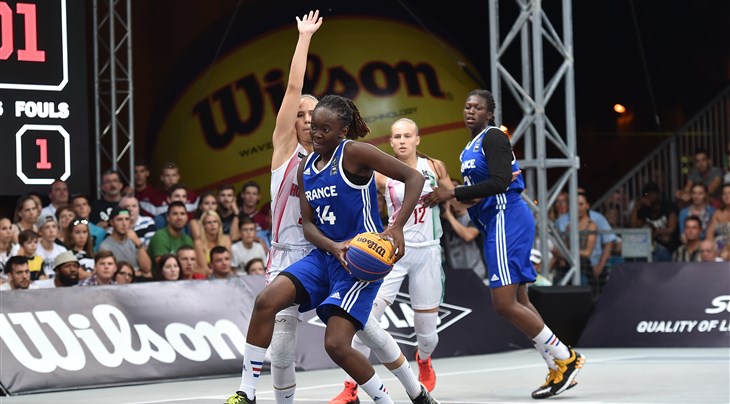 Katerina Galickova (Czech Republic)
The 6ft (1.83m) Galickova came to 3x3 with a prestigious basketball resume and did not disappoint neither at the U18 World Cup nor at the Europe Cup Qualifiers. The 17-year-old showed more moves than JoJo Gomez under the basket and cracked the top 5 in scoring at the U18 World Cup. Even better: she led Czech Republic to a stunning silver medal in China and to the final of the FIBA 3x3 U18 Europe Cup Hungary Qualifier.

Ligita Golovko (Latvia)
Boxing has Golovkin, 3x3 has Golovko! The 5'11'' (1.80m) Golovko was the 2nd top scorer of the women's qualifiers (7.6 ppg) and brought Latvia all the way to the final of the U18 Europe Cup Qualifier in Riga. Can they follow in the footsteps of their big brothers who won the Europe Cup in July? Latvia seems to be the new land of 3x3!

Laura Prats (Spain)
Prats didn't play the U18 World Cup in June and her addition to the Spanish team was key to win the U18 Europe Cup qualifier in Latvia. She scored an ice cold 2-pointer to give Spain the victory in a thrilling overtime against the hosts in the final. More big shots will come in Debrecen, mark our words.

Sarah Shematsi (France)
Can the 6-footer (1.83m) win the 3x3 U18 Europe Cup back to back?. Without her, France could not go past the quarter-finals at the U18 World Cup this year but, with her intimidating defensive skills, Les Bleuettes dominated the Hungary qualifier.

Yuliana Samorodova (Russia)
Russia has been dominating women's 3x3 in senior categories (Europe Cup - World Cup double in 2017) and the future looks bright with the relentless Samorodova. Last year, the 5ft 8in (1.74m) Moscow native finished 4th in Debrecen but with an improved two-point shot, she's not going home without a medal around her neck.