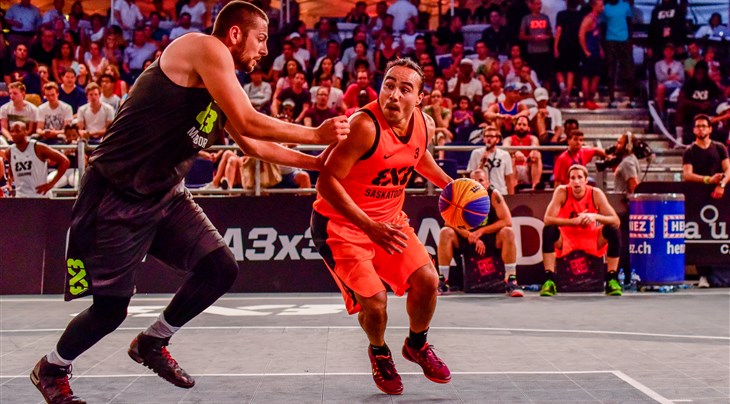 Lausanne (FIBA 3x3 World Tour 2017) So we heard there’s a big fight this weekend? The fight for 3x3 supremacy at the Lausanne Masters. Mayweather who? The only 'Money’ we acknowledge is Michael 'Money in the Bank' Hicks.

We're here to give you 5 reasons to follow the FIBA 3x3 World Tour Lausanne Masters for free on our Facebook and YouTube channels on August 25-26. We will be in Lausanne for the 5th consecutive year. You know who will discover the Olympic capital for the 1 st time?

At number one: The number one 3x3 team in the World Novi Sad Al Wahda! Just 1 thing though: Mr Bullutproof proved he wasn’t injury proof. Novi Sad Al Wahda will be without the number 1 3x3 player in the world, Dusan Bulut, who hurt his ankle in practice. Can they win without Bulut? Time to step up for the sniper Dejan Majstorovic and the Serbian Sergeant Marko Savic.

Coming up at number 2, the defending champs! Team Saskatoon! Last year the Canadians destroyed their opponents. Nolan Brudehl was out there showing more range than the Knight King. Willie Murdaugh was doing Willie Murdaugh things and Michael Linklater came up with one of the best plays of the season.

At 3, Team Cergy. The Sy brothers have been dunking on people on every playground and every Basketball Champions League hardwood. This week’s Top 5 is gonna be wild, wild, wild, wild. Will Cergy become the first-ever French team to win a Masters?

4th on the list is the spectacular Nauris Miezis, MVP of the Europe Cup last month with Latvia. Don’t let his braces fool you, this guy can deliver some grown-man crossovers. He can pass the rock, he can shoot and he’s quicker than TMZ.

Last but not least, Smoove is coming back to Lausanne. Back in 2013, 3x3 fans discovered the Ukrainian freestyler turned pro dunker. People are not supposed to throw the ball behind their back in mid-air and finish between the legs with authority. Just to give him a little challenge, we brought his countryman Miller, who was the World Tour Dunk Champ last year. We know it’s blasphemy out there but there’s a chance this dunk contest is better than Swiss chocolate.

Check out FIBA.basketball/3x3WT for more and make sure to subscribe to Youtube.com/FIBA3x3 to follow us live during the event. If you’re excited like there’s a solar eclipse: drop the hashtag #3x3WT on all your favourite social media channels and we’ll share on our Facebook, Twitter, Instagram, Snapchat – what else do we got? Youku, Sina Weibo, Tencent accounts at @FIBA3x3.